Given the TSX’s recent decline, you may be losing hope that you’ll be able to earn a decent return from investing in the market. However, it isn’t all a lost cause. There are plenty of well-performing stocks that you can find on the TSX that can continue to produce strong returns going forward.

Before you give up on Canadian stocks, consider the three below that have been stars on the TSX over the past 12 months and that could still produce strong returns for investors that buy today. 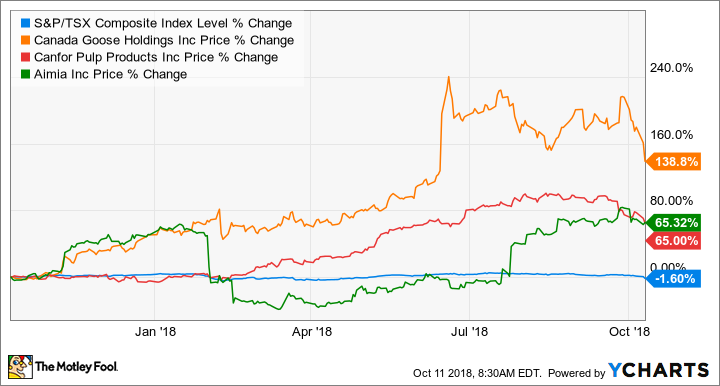 Canada Goose Holdings (TSX:GOOS)(NYSE:GOOS) has struggled in the past few weeks, giving back some of the gains it has achieved this year, but so far in 2018 its share price is up around 60% and in the past 12 months it has risen by nearly 140%.

What makes the company an appealing buy for the long term is its focus on quality and producing handcrafted apparel that can generate strong margins, especially as Canada Goose sells more to its direct-to-consumer segment where it saw strong growth last quarter, as that can help the company avoid costs related to using an intermediary.

The company also announced plans to expand into China, which is hosting the next winter Olympics. Not only will that drive a lot of sales growth, but Canada Goose will also get a lot of advertising from seeing its products during the games as well.

I wouldn’t be surprised to see the stock not only recover from this recent dip, but continue on its previous ascent.

Canfor Pulp Products (TSX:CFX) is up 65% in the past year, and its success should come as no surprise as the company saw its sales grow by 40% last quarter. Canfor has also consistently been able to post strong profits and despite this it still trades at a very low multiple of just eight times its earnings. There’s still a lot of potential for the stock to climb, as it is very cheap and demand could continue to rise.

With pulp being used in many consumer products, as the economy continues to perform well it’s likely that we’ll see the demand for pulp products increase as well.

Aimia (TSX:AIM) is also up around 65%, and it’s a bit of a surprise given how hopeless the stock appeared to be after it was announced it would be losing Air Canada as a customer of its Aeroplan program.

However, after Aimia said that it would be entering the airline industry and could have potentially challenged the popular airline’s dominance there, Air Canada, along with other companies, sought to buy Aeroplan. Investors were bullish on the deal and that helped to lift Aimia’s stock.

With an influx of cash after the Aeroplan sale and strong management, I wouldn’t be surprised for Aimia to take on another big venture that could deliver value to its shareholders. Aimia has proven that it has strong leadership and a lot of great ideas, and it’s never a bad idea to invest in that.