The story of RNC Minerals (TSX:RNX), better known as Royal Nickel Corp, is getting interesting by the day. If you haven’t heard about the company, RNC Minerals is a junior Canadian miner that was, until some months ago, focused on developing its Dumont Nickel project, touted to be the world’s largest nickel sulphide deposit.

All of that changed in September when RNC discovered huge gold deposits from a mine it had put up on the block. Incidentally, the company changed its business name from Royal Nickel to RNC Minerals in 2016 to reflect it’s now a multi-asset company.

As luck would have it, in September, RNC found 9,250 ounces of high-grade coarse gold, including two big specimen stones from a single cut (the process of blasting to find mineral deposits) at its Beta Hunt mine in Australia. The company immediately put its Beta Hunt sale discussions on hold.

Now, here’s where things get interesting.

Gold grade from Beta Hunt showed a significant uptick well before September. However, RNC downplayed the development, and despite a solid 60% jump in gold production from the mine in July, it still considered the mine “non-core” and was keen to sell it by August.

The September development, therefore, came out of the blue and blew the markets away. 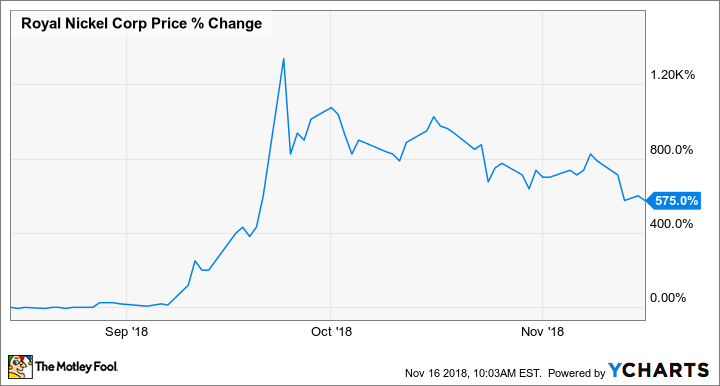 So, what’s next for RNC? Its just-released third-quarter earnings report may have the answer.

RNC’s gold production surged 199% year over year in Q3 to hit a record of 31,360 ounces. RNC sold off 75% of that and raked in solid revenue, which lowered costs and losses.

The biggest takeaway, however, is the impact on RNC’s balance sheet. RNC paid off debt worth $11.5 million in Q3 and held cash and equivalents of $18.8 million as of Nov. 12.

The Beta Hunt discovery is, however, a “once-in-a-lifetime discovery,” as RNC called it, and the company will need more of that gold coming in to keep its operations running.

What RNC needs to keep growing

As of the end of the third quarter, RNC had a working capital deficit of $27.4 million. In simpler words, its current liabilities exceed current assets by that amount. Because current liabilities have to be paid off within a year, RNC needs more liquidity.

The gold specimens RNC held at the end of Q3 should reduce its working capital deficit by only $14.5 million when sold. Its cash balance, which includes the value of gold specimens held for sale, is enough to support drilling activities only through the first quarter. That means RNC should have struck more gold by then or be able to raise external funds to support exploration. Higher gold prices would hugely help the company.

RNC explicitly says that its “ability to operate as a going concern is dependent on its ability to raise financing.”

Of course, Beta Hunt has been a great discovery, and RNC expects it to eventually be a large gold mine. Let’s hope that happens, because beyond Beta Hunt, RNC’s future depends on Dumont — a mine that aims to exploit the growing market for nickel and cobalt — which has yet to start operations.

For now, RNC Minerals should deliver another good quarter in Q4 that should keep investors upbeat, but the path to growth thereafter will decide its long-term fate.

Inflation is coming. In 2022, a myriad of factors are causing economists to sound the alarm on inflation. Far from …

Why Did Major Drilling Stock Soar 10% on Wednesday?

TSX Today: What to Watch for in Stocks on Thursday, January 13

Filo Mining (TSX:FIL)(OTC:FLMMF) shares jumped 13% on Tuesday after the company announced that its Filo del Sol drilling program is …

Why Did Lithium Americas Shoot up 14% on Tuesday?

Lithium producer Lithium Americas (TSX:LAC)(NYSE:LAC) saw shares spike by around 14% on Tuesday on the TSX today. This came after …

Gold bugs out there have had a difficult time in recent years. Despite negative real interest rates and high inflation, …

What happened? The shares of some popular Canadian uranium companies fell sharply on Thursday, reversing their gains from the previous …