The Motley Fool Canada » Dividend Stocks » Is Gold a Good Addition to Your Portfolio?

Gold can help diversify your portfolio. However, it doesn’t generate any income.

I believe that Franco-Nevada (TSX:FNV)(NYSE:FNV) is a superior investment to gold. The company is primarily a gold royalty and streaming company with a large and diversified portfolio of assets. Further, it offers a yield of about 1.3%, and it has been increasing its dividend every year.

As explained on Franco-Nevada’s website, royalties are ongoing economic interests in the production or future production from a property, while streams are metal purchase agreements that provide, in exchange for an upfront deposit, the right to purchase all or a portion of one or more metals produced from a mine at a preset price.

So, Franco-Nevada is a low-risk, high-margin business. Its balance sheet is clean with no long-term debt, and its recent net margin was 31.8%.

Franco-Nevada stock tends to outperform the market. From right before the last recession in 2007 to now, the stock has delivered an annualized rate of return of about 19.1%, which greatly outperformed the returns of 6.5% of the U.S. market (using S&P 500 as a proxy) in the period. Notably, the U.S. market generally outperforms the Canadian market or the TSX Index. So, you can assume that Franco-Nevada stock tends to outperform the TSX Index, too. 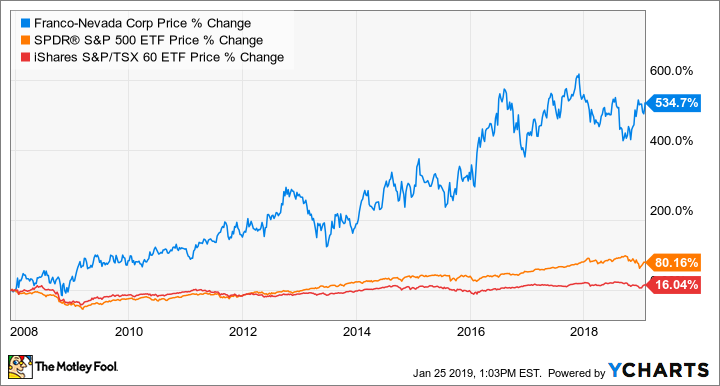 Since 2012, Franco-Nevada stock’s annualized rate of return has been 14.6%, which outperformed the U.S. market returns of 12.5%. Now, of course, there are periods in which the U.S. market beat Franco-Nevada. It goes without saying that investors should always aim to buy the stock at a discount — at least as it pertains to Franco-Nevada’s unique situation, as explained in the next section.

The problem with Franco-Nevada is that it always tends to trade at a premium valuation. As of writing, it trades at a price-to-earnings ratio (P/E) of over 60, while its five-year P/E is more than 190!

Franco-Nevada is an intriguing investment that maintains a premium multiple because it has a large and diversified portfolio of assets, which will only become larger and more diversified over time as it adds new streams and royalties.

I think the best valuation metric to look at for an entry point in Franco-Nevada is its price-to-operating-cash-flow ratio, which indicates the stock is slightly undervalued.

Alternatively, for a simpler investing method, aim to buy the stock on meaningful dips and average into a position over time as a quality addition to your portfolio for diversification purposes.

Analysts from Thomson Reuters have a 12-month mean target of US$81.40 per share on Franco-Nevada, which indicates near-term upside potential of about 10%.

Have you heard about Amazon’s secretive “Project Vesta”?

Few people have… yet some of the greatest minds in the world believe this innovative technology could change the world.

One grassroots Canadian company has already begun introducing this technology to the market – which is why legendary Canadian investor Iain Butler thinks they have a leg up on Amazon in this once-in-a-generation tech race.

But you’ll need to hurry if you want to pick up this TSX stock before its name is on everyone’s lips.

To learn more about this exciting technology and dark horse TSX stock before it’s too late, click here now.