Management always makes their acquisitions sound good. They probably do believe those acquisitions will add value or be accretive. If not, they wouldn’t be making the acquisitions at all.

However, reality is harsh sometimes, as we’ll see with the Maxar Technologies’s (TSX:MAXR)(NYSE:MAXR) acquisition.

Maxar was formerly known as MacDonald Dettwiler and Associates (MDA). It rebranded itself as Maxar after it completed the purchase of DigitalGlobe for US$2.4 billion (CAD$3.1 billion) in October 2017.

The estimated benefits of the acquisition

When MDA announced that it’d acquire DigitalGlobe in late February 2017, it believed the combined company would offer enhanced, value-added services to global commercial and government customers. Additionally, it thought it would expand market access, increase scale, and diversify revenue and customer base.

More concretely, MDA expected the transaction to be accretive to operating earnings per share in 2018 and anticipated it to deliver $75-150 million in run-rate Synergies by 2019.

Fast forward to today from February 2017, the stock has lost close to 90% of its value. 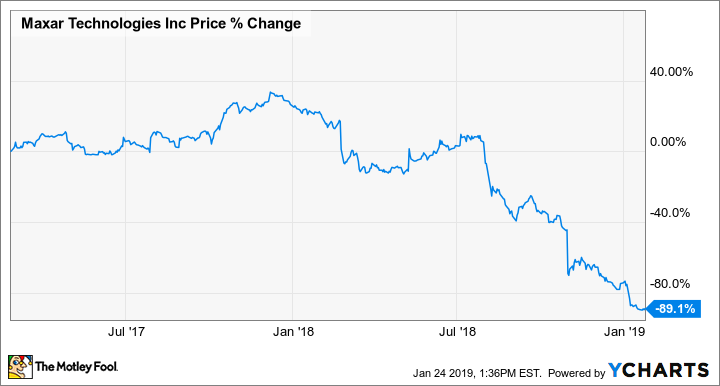 MAXR data by YCharts. The price action of TSX:MAXR from February 24, 2017, to today. Instead of value creation, Maxar had massive value destruction. And it’s the shareholders who lose money.

Management can make acquisitions sound wonderful. In most cases, the relevant stock might pop in the short term due to the good news of an acquisition that is supposed to generate additional value. If the merger is executed poorly or if the acquisition isn’t as good as initially thought, usually within a year, the stock will underperform. In Maxar’s case, it was a huge loss.

So, next time a company acquires another, take a step back and just watch from the sidelines for six months to a year after the acquisition completes to avoid losing money. After all, the goal of investing is to generate returns with the bottom line of capital preservation.

Several factors led to the recent most uptick in the market. The S&P/TSX Composite Index went through a rough month in…