The Motley Fool Canada » Investing » Has This Growth Stock Finally Lost its Luster?

However, the growth stock (if you can still call it that) lost altitude rather quickly. Since July 2018, it has fallen as much as 40%! 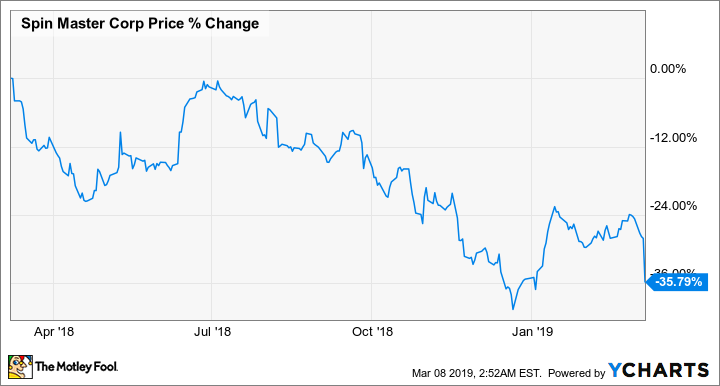 Despite a huge decline of 10% after reporting its fourth-quarter and full-year results, Spin Master stock is still more than 8% higher than its December low when the whole market corrected.

Has the growth stock finally lost its luster or is it a buying opportunity?

Here are some key metrics of Q4 compared to the same period in 2017:

The numbers get worse as we go down the table. Earnings per share were almost shaved by half, and Spin Master also saw a quarter percentage decline in adjusted EBITDA. Worst of all, free cash flow turned negative.

The big culprit is the Remote Control and Interactive Characters segment.

Its gross product sales fell nearly 46% over the same quarter in 2017, indicating its once hot-selling brands, including Hatchimals, Zoomers, and Air Hogs, have lost their magic to mesmerize kids. This segment still contributed to 23% of the gross product sales, though, for Q4.

In one simple sentence, Spin Master’s Q4 results were horrible.

Here are more normalized numbers by reviewing the full-year results.

The bad Q4 results weighed down on the full year’s performance.

Spin Master’s Q4 results was a gigantic disappointment. The company needs to come out with the next big hit of a toy. With Spin Master’s track record of innovation, I’m not worried if this will happen. It’s a matter of when.

Meanwhile, Spin Master’s “other revenue” segment, which comprises app revenues and royalties from its intellectual properties, continues to zoom — with growth of 42% year over year.

The stock will probably be weighed down over the near term. Interested investors with a big appetite for risk should look for consolidation in the stock before buying to avoid catching a falling knife.

No stock goes up every quarter or every year, for that matter.

When Spin Master comes out with the next big thing, the stock will pop.