Shopify Inc (TSX:SHOP)(NYSE:SHOP) has been doing very well this year, as the stock has risen around 60% and is at new all-time highs. However, we’re also seeing a lot of people shorting the stock lately as investors are doubting whether Shopify can keep at this pace. And we’ve seen the impact that short-sellers have had on Shopify in the past. 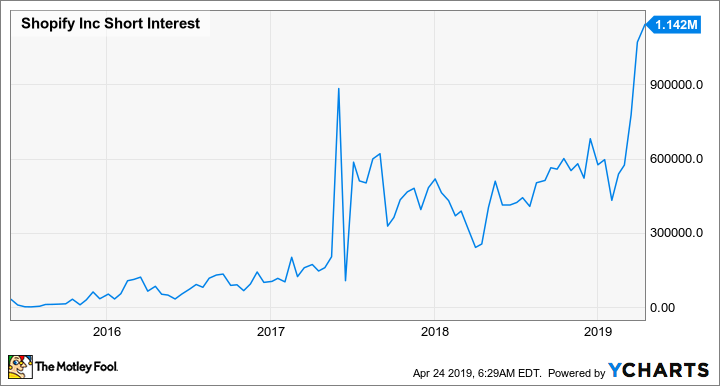 Despite its strong performance, I’d be looking to sell the stock today for three main reasons.

The stock is trading at a very high multiple of sales

As the stock isn’t currently profitable, one way to value growth stocks like Shopify is to look at the company’s price-to-sales (P/S) multiple. Generally, even a multiple of more than three or four is high, and Shopify is trading well above that at writing. At a multiple of around 23, it is also high compared to where the stock has traded at historically. Over the past five years, Shopify stock has normally traded below a P/S of 20: 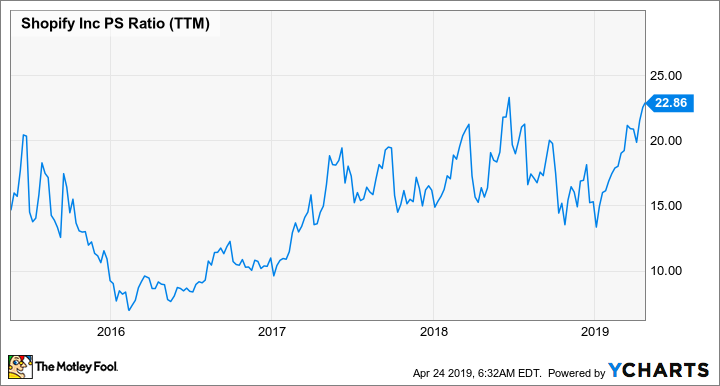 Another strong quarter of growth will certainly help bring down the ratio a little bit, but even with another 50% increase in sales, I estimate the multiple would still come in at over 20 if the price stays where it is. Shopify has simply risen too fast in too short a period.

The stock is in overbought territory

The Relative Strength Index (RSI) is a measure of a stock’s recent trading activity, and while I’m not a big fan of technical analysis, I find the indicator very helpful in determining whether there’s been too much bullishness or bearish activity lately. It involves looking at the past 14 trading days and comparing the stock’s gains versus its losses, and the more lopsided the gains are, the higher the RSI number, and the reverse is also true. Once RSI reaches 70, the stock is considered overbought, which is where Shopify is and more gains will send it even higher. 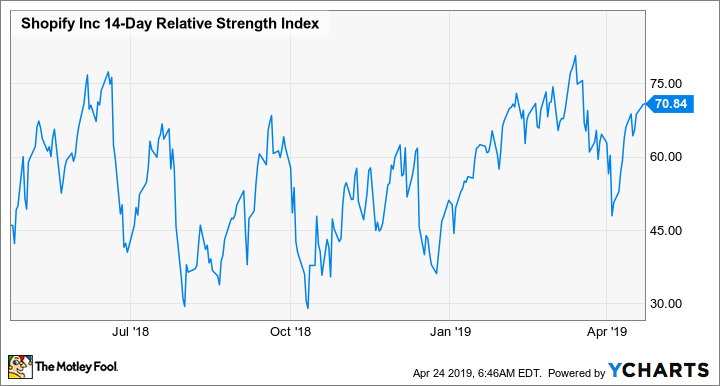 By no means does this guarantee there will be a drop-off in price, but it does show that investors have been very bullish lately, and there really hasn’t been a big development to justify it. That would concern me, as it suggests that speculators may be playing a big role in the stock’s recent ascent in price — a correction that could be around the corner.

Earnings are coming up

Shopify is expected to release its quarterly earnings on April 30. And from what we’ve seen from Shopify in recent quarters, growth rates are slowing down while competition is increasing. I’d expect that Shopify will continue to experience growth of over around 50% this coming quarter, but I’d be surprised if it was higher than what it achieved last quarter. And investors are bearish when they see declining rates of growth, even though it is difficult to keep growing at such high rates each and every quarter.

Shopify has done very well this year, but I’d argue a bit too well given the lack of substance behind the rally. An earnings report can sometimes douse the stock with some cold water if it’s not that great, and that’s what I’d be worried about with Shopify when it reports its Q1 results next week.

4 Dividend Stocks to Hold in Your RRSP Forever

Inflation and volatility should spur RRSP investors to buy dependable dividend stocks like Hydro One Ltd. (TSX:H) and others right…

Given their stable cash flows and healthy growth potential, these three safe stocks are excellent buys for beginners.

Canadians may want to snatch up top bank stocks like Bank of Montreal (TSX:BMO)(NYSE:BMO) that look undervalued today.

Stocks, Bonds, or Real Estate: What’s the Best Way to Prepare for a Recession?