We all remember cannabis stocks last summer. The headlines were everywhere, so even if you weren’t really into investing, you still knew that these stocks were hot. After remaining relatively stagnant for years in some cases, suddenly legalization was coming and people were buying up these stocks like they were going out of style.

But then there was that severe drop, seen on the graph below. Across the board, legalization came and went and shares plummeted during October and December. It looks like most stocks have begun to rebound at least a bit, if not to those all-time highs. So, will the cannabis industry see another red-hot summer? 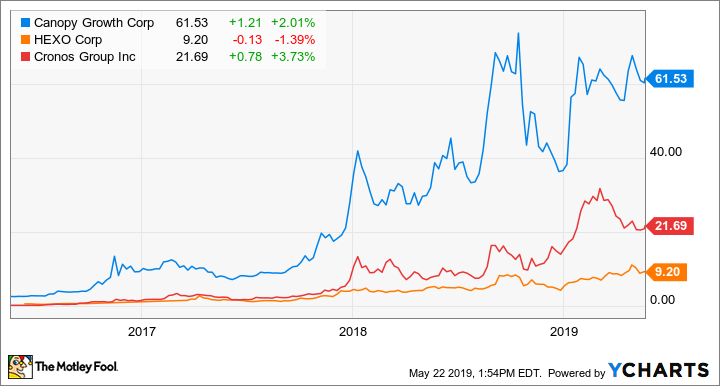 Setting up for success

Canopy Growth (TSX:WEED)(NYSE:CGC), of course, is on the list as the top producer in Canada. But is Canada big enough? This business doesn’t think so and has been in the process of expansion for quite some time. The company has made deals with Constellation Brands and Acreage Holdings, while also setting itself up in the hemp department through the United States so that when legalization (hopefully) happens, it’ll be ready.

But it’s unclear when that will be. While states can legalize cannabis in the meantime, the entire country will have to wait until at least 2020 if a new president is elected for marijuana to be legalized, unless someone can convince President Trump of its worth. So, that begin said, with no imminent legalization date on the horizon, it’s unlikely that Canopy Growth will see those huge numbers this summer. But if legalization comes, expect some huge numbers.

Cronos Group (TSX:CRON)(NASDAQ:CRON) has moved up in the ranks due to its recent deal with Altria Group. The company pumped $1.8 billion into the cannabis company, and Cronos honestly has yet to do much with it.

This can be seen two ways. Either they’re holding on to this cash for acquisitions or the business is going to grow another way: through production. That money could put it on top as a marijuana producer and, depending what avenue they take, could create some serious excitement around shares.

With that in mind, Cronos is more of a wait-and-see stock. And right now, there’s not much to see. After a strong first quarter, shares have fallen a bit and have rebounded since then. Analysts don’t see the stock as doing all that well in the near future, but the stock is actually doing better than last summer, so who knows what could be in store?

The stock that has been garnering the most excitement lately is Hexo (TSX:HEXO). This stock has made a bunch of moves lately that has really put it over the edge, production wise. And, like Cronos, its shares are actually doing far better than last summer, near its all-time high at the time of writing.

Better still, this stock is still considered cheap considering its past returns and projected earnings that are balanced out with no debt. And analysts are also excited by the company’s partnership with Molson Coors Canada to make edibles ready for market later this year. They predict the stock could rise to $15 per share in the next 12 months, and depending when they announce products are ready, that could be as early as this summer.

Because there isn’t that looming deadline of legalization like there was last year, I seriously doubt we’ll see another red-hot summer for the cannabis industry as we saw last year. Until the United States announces legalization, stocks won’t see that serious rise for quite some time. And even then, it’ll only be the stocks that are set up in the U.S.

So, if I’m buying one today hoping for summer growth, I’m going with Hexo. This stock has the most potential at the lowest price, with everything else being too much of a serious investment. Just remember: every stock in this industry is a risky choice.

Should You Invest in Canadian Cannabis Stocks Like Canopy Growth in September?

More countries are legalizing marijuana. Should you buy ACB stock?

Long-term investors can consider buying shares of Dollarama and Curaleaf to generate market-beating gains in the next two decades.

Is Now the Time to Buy Cannabis Stocks?

These cannabis stocks are up 70% and 19% this month! Should Canadian investors hop on board?

Why I’m Considering Canopy Growth Stock For My RRSP

As the cannabis industry grows, adding Canopy Growth stock to my RRSP will give me access to massive upside.

Canopy Growth stock (TSX:WEED)(NASDAQ:CGC) popped 20% on Monday from an announcement made by another cannabis producer.