Enbridge (TSX:ENB)(NYSE:ENB) stock has been falling again as we continue to see no shortage of issues plaguing oil and gas stocks. The pipeline company is facing uncertainty again surrounding its Line 3 replacement project after being asked to consider a wider scope of environmental impacts. Oil prices have also been sliding over the past month, as even production cuts are struggling to keep commodity prices up. 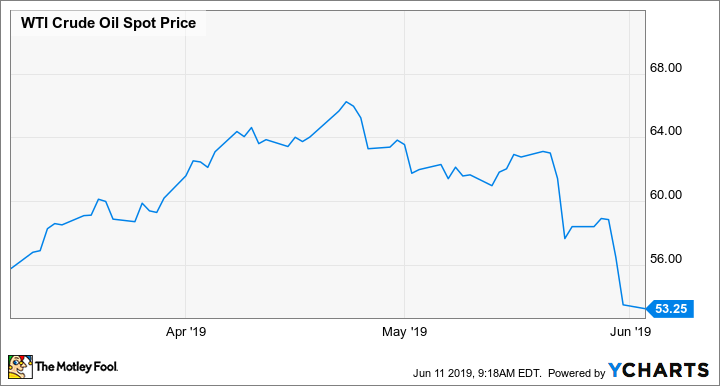 The price of Western Canada Select has fallen below $40 after looking like it might have some strength at around $50 per barrel. Every time there’s hope that maybe there might be some positivity around oil and gas stocks, we see the situation regress. It’s no doubt frustrating for the industry, as we still haven’t seen a recovery from the downturn that began in 2014. It makes oil and gas stocks as a whole an unappealing investment today, but Enbridge could be an exception to that, as the company has continued to do well, even with the challenges that have persisted in the industry.

It’s evident that a low commodity price clearly has some correlation to Enbridge’s stock price, but it certainly hasn’t been a one-to-one relationship:

One of the big reasons why Enbridge has been able to weather the storm as well as it has is that it’s found ways to be more efficient in its operations. Not only have sales of $46 billion this past year been well up from the $38 billion that the company generated back in 2014, but margins have been a lot stronger as well. This past year, 30% of Enbridge’s top line has made it through to gross profit compared to just 17%.

And so even with rising expenses, Enbridge has seen its net income double from four years ago. It’s not just the income statement that’s a lot stronger, but the company’s cash flows have also improved significantly. In 2018, Enbridge generated $3.2 billion in free cash flow, while in 2014 it burned through more than $8 billion after its operating and investing activities.

There has been a definite improvement in Enbridge’s operations that make it an appealing buy even amid all the headaches coming from the industry. One enticing reason is the company’s growing dividend, which could help make up for the struggling share price. At around 6.3%, the dividend is a very high one and with the company performing well, it could be an opportunity for investors to get a great deal.

Enbridge does not appear overly concerned with its payouts, as it recently increased its dividend payments by 10%. The company has regularly increased its payouts over the years, and even with the industry not appearing to be very strong, Enbridge remained committed to creating value for its shareholders.

However, dividends alone shouldn’t be a reason to invest in a company. The stock has shown strong growth and is a good value buy today, trading at 1.5 times its book value and about 22 times its earnings. It’s one of the safer risks you can take in the oil and gas industry. If oil and gas ever gets going, Enbridge’s share price could produce significant returns for investors.