Home » Investing » Energy Stocks » A $1,000 Investment in Enbridge, Suncor, and TC Energy at the Beginning of 2019 Is Worth This Much Today

It’s been a tough year so far for the oil and gas industry, and likewise for its investors. Watching the S&P/TSX Energy Composite during the last year is enough to make even the strongest stomachs turn.

Things seemed to be looking up in the new year, with the composite rising 22% between January and the end of April. That’s when stocks went south. While the price of West Intermediate Crude went up, Canadian prices remained down.

This was due to the glut in oil and gas that continued in Alberta, leading to production cuts across the province that have affected much of the economy. That glut, in turn, comes from the lack of transportation.

But when we’re looking at the heavy hitters of the energy industry, investors should be happy even if their investments haven’t been faring as well as they hoped. Energy stocks are perfect long-term investments, so let’s look at three and how a $1,000 investment would have fared thus far. 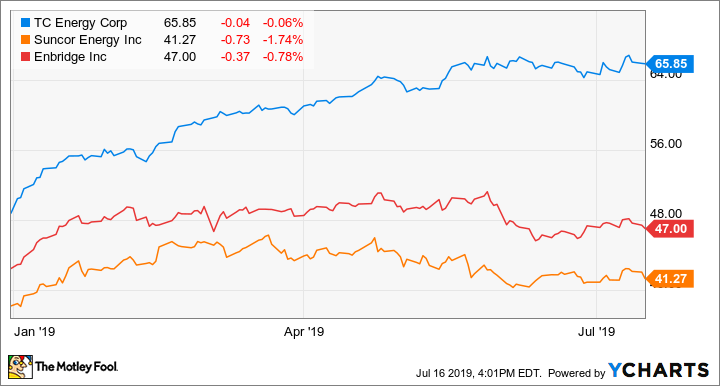 As you can see, it looks as if TC Energy performed the “best” while Suncor performed the “worst” during that time. But let’s dig in to whether each stock is likely to keep up this position.

As I mentioned, one of the serious problems affecting the oil and gas industry is the lack of means to transport it. Enbridge is trying to remedy that situation, with $16 billion in secured projects set to expand its pipelines.

Of course, the company has faced recent hiccoughs with the Line 3 expansion, though that seems to be out of the way for now.

Yet when all is said and done, Enbridge will have a number of pipelines shipping oil by 2021 that should bring share prices soaring and the oil and gas industry back to normal.

The main concern for the company remains environmental regulations, which should only increase over the years. That could be why Enbridge has given itself such a tight deadline for these projects, trying to get the projects done before further regulations are in place.

As the company tries to grow further down the line, these projects could become harder to complete.

Suncor is in a great position as a diversified stock that doesn’t depend on just one area to continue bringing in cash, which is why Warren Buffett likely renewed his investment in the company last February.

For example, its refining and marketing segment brought in about $1 billion in operating earnings during the first quarter, making up about 80%. This has meant the company can still remain relatively balanced even during a shortage of oil and gas it can supply.

Meanwhile, the company has used the oil and gas downturn to make some great investments into its future. The company has bought up assets to grow its oil sands operations for decades.

So while R&M is a great segment for market volatility, it’s not all that Suncor has going for it looking forward.

The only red flag from some analysts is that the company could be focusing too much on growth, leaving some with the concern that they should wait until a rebound looks imminent before furthering a growth agenda.

Finally, TC Energy has been one of the steadiest stocks year to date, with growth coming from the company’s expansion into other countries besides the United States and Canada.

In TC Energy’s case, Colombia and Mexico have provided the company with new opportunities for growth. This has also led the company to announce a dividend increase of 8-10% through 2021.

Then, of course, there’s Keystone XL, which the company expects to be online by 2021. All this combined leaves investors happy to buy up this stock before the others on this list, as TC Energy looks to be the best investment for the immediate future.

But this diversification also means the company is also open to both Enbridge and Suncor’s problems. On the one hand, environmental concerns will mean future pipelines will be hard to build.

In addition, as the company waits for pipelines to be approved, it means it won’t be able to grow through acquisitions with limited cash on hand.