Home » Investing » Is This Blockchain Stock the Hottest New IPO?

Investors looking for the next big stock on the markets may not need to look much further than recently listed Bitfarms (TSXV:BITF). The Quebec-based company recently began trading on the TSX Venture Exchange and has already been seeing a lot of trading activity and excitement.

Out of the gate, the stock saw volumes reach more than 2,000,000 in the first three days of trading. The share price reached as high as $4.2 on day three, which would have been a significant return from the stock’s opening price of just $0.80 when it debuted on the exchange.

Although things slowed down since then, the stock still has tremendous potential, especially with Bitcoin finding new life in recent months.  Bitfarms mines cryptocurrency and has four computing centres in Quebec today with a total capacity of 34 megawatts (MW) and is looking to add another six, which would add 125 MW.

The company is vertically integrated and focused on cost efficiency while still using entirely green hydroelectricity to power its mining facilities. Costs can be expensive when it comes to mining for cryptocurrency and Bitfarms’s cost averages just US$0.04/kWhr.

In 2018, the company generated revenues of US$33.8 million. However, despite recording a gross profit of US$10.9 million, it still ran at an operating loss of US$18 million, as Bitfarms incurred an impairment charge of more than US$19 million.

Bitfarms currently has access to a US$20 million debt facility, giving it lots of cash it can tap into to help grow its operations.

Why the stock could have a lot of potential

Cryptocurrencies have been gaining popularity this year, especially with Facebook recently announcing that it would be launching Libra. Bitcoin had already been on the rise even before then and would reach more than US$13,000 before falling back down in value. However, there clearly is an appetite from the public to give Bitcoin another try, despite a very epic collapse that took place over a year ago.

One stock that’s seen a lot of benefit from Bitcoin’s popularity this year is Hive Blockchain Technologies (TSXV:HIVE). The stock has risen by more than 30% since the start of the year, and that’s still after declining from highs of over $1 per share. While Hive hasn’t seen a one-to-one relationship with the price of Bitcoin, it’s undeniable that at least for most of the year, they looked to have moved in the same direction: 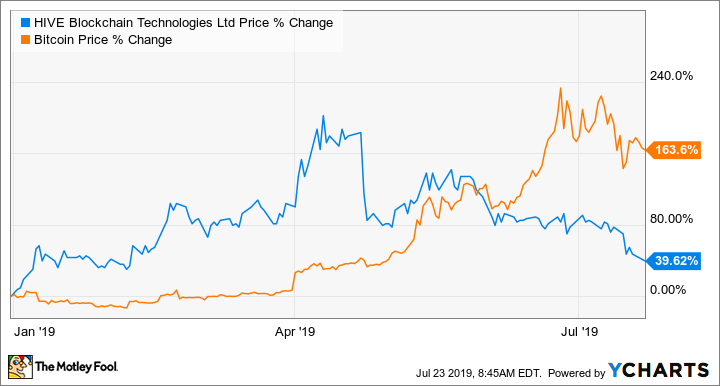 The problem is that the volatility of Bitcoin has reminded investors that the risks are still very much there. And that’s likely contributed to Hive seeing a bit more hesitation in the stock lately. However, another surge in the value of the digital currency could send blockchain stocks up in a hurry.

The risk involved in investing in Hive, Bitfarms, or any other blockchain stock is that they’ll be heavily influenced by the value of cryptocurrencies like Bitcoin that are out of their control. It’s a risk that’s similar, although a bit more extreme, to what we’ve seen in oil and gas, where commodity prices can prevent good stocks from rising in value.

Unfortunately, that means there’s not a lot of predictability in being able to forecast how well these companies will do or which direction their share prices will go. But if Bitfarms is able to be profitable and benefit from the Bitcoin hype, it could prove to be a much better investment than Hive is today.