When I first got into investing, there was pretty much one thing I knew: buy low and sell high.

So, that’s what I did with a number of stocks. I’m a millennial investor and was excited at the concept of making more money by simply buying shares of a company.

However, while buying low and selling high isn’t exactly wrong, it’s not exactly right either.

What I’ve learned since then (frankly, from reading so much at the Motley Fool Canada) is that smart investors should heavily research stocks that can be held for the long term. That way, it’s not that you’re buying low and selling high; you’re buying at a price with the goal of not selling for decades. Ideally, if you’ve research properly, when you finally sell those shares, they should be much, much higher.

Cut to this year’s major regret.

After researching Shopify (TSX:SHOP)(NYSE:SHOP), I bought shares in the company back in September of 2018 at about $207 per share. This was before the major dip around the new year, when shares then dropped down to around $160 per share. I think that was the first step in my downward spiral: panic. 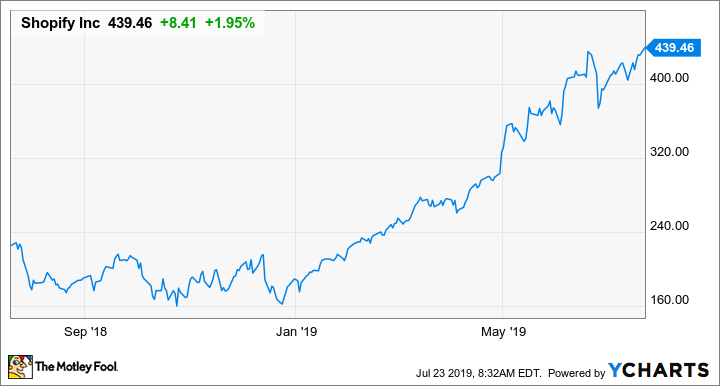 The main advice for investors that many other contributors write about all the time is this: don’t panic! Stocks go up and down, and if you truly believe in your stock’s potential, don’t panic when it goes down.

So, when the stock started moving up again, I watched with glee as my gains continued to rise. Then came the next step in my mistake: analyst predictions.

I — like many others — tracked Shopify almost daily, seeing how the stock performed day after day and wondering if this was the day I should sell. Despite the stock’s continued stellar earnings reports, expansion into new business areas, and new products, I read analyst predictions that the stock was headed towards a dip and decided it was time to sell.

At about $346 per share back in May, I got rid of my Shopify stock. I’ve regretted it ever since.

Let me be clear: there is a lot of evidence Shopify is still headed towards a drop in share price. The stock is outperforming like crazy, with analysts warning that the current valuation of the stock price includes its future potential. But here’s the thing: I should have trusted my research and held on to this stock for the long haul.

Shopify may not yet be profitable, but it’s certainly on the way there. The company has been proving itself capable of becoming the next Amazon, with North America only being the start of the international operation it could manage one day. Shopify also has so much room to grow within its fulfillment section of the business. The more it offers, the harder it will be for merchants to switch from Shopify to another platform for the same needs. That’s where Shopify also has an advantage over Amazon. Then, of course, the company has only begun the process of bringing on enterprise merchants — larger clients that could bring in a whack of cash for this company through Shopify Plus.

Here’s where I’m at today with Shopify.

On the one hand, I certainly won’t be buying up this stock at a share price of around $440 at writing. While the stock has gained 135% year to date, I don’t trust that it’s going to continue that upward trend much longer. As fellow Fool writer Joey Frenette writes, it’s far more likely the stock could hit $250 by the year end, rather than $1,000.

But when the stock does (hopefully) drop, you’d better believe I’m going to buy up a bunch of shares while I can. After that, I’m going to leave those shares alone for a long, long time. If I feel at any point that I might want to sell, I’ll only sell a few shares and leave some stake in the company. In the end, I should have trusted my research was right and that Shopify has a long period of growth ahead of it.