At the best of times, SNC-Lavalin Group Inc. (TSX:SNC) hasn’t proven to be the most stable of stocks on the TSX. The stock was on a steady increase after its initial public offering (IPO) back in 1986, but then all came crashing down in 2008.

Since then, the stock has gone up and down like a yo-yo, with shareholders bouncing in and out through the years and making most investors’ heads spin. 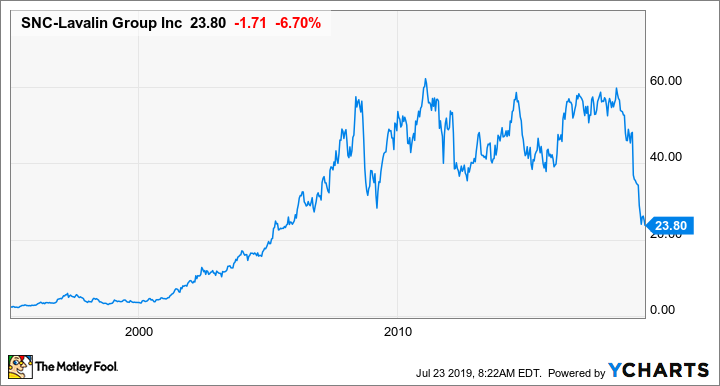 In case you aren’t aware, here’s a brief history of the goings-on at SNC. The company has been dragged down by bribery and corruption charges for years — accusations that go back decades.

Most recently, SNC has been dealing with two issues. First, there are the corruption charges related to its operations in Libya, which include allegations of bribing country officials and defrauding the nation as much as $100 million.

Then, there’s the SNC-Lavalin Affair that goes way up the ladder to include Prime Minister Justin Trudeau, alleging that the PMO pressured MP Jody Wilson-Raybould to intervene with the investigations into SNC. It’s been more than a little shady, to say the least.

On July 22, shares of the company fell the most since May after SNC made two huge announcements. The announcement was the news of a massive reorganization within the company.

Next, the company announced that shareholders should expect “significantly lower results” this year — not just in the next quarter, but also in the next year.

The firm seems headed toward falling below $20 per share if things keep up as they have been, with a lot of question marks moving forward.

The profit warning is the third since January, after SNC wrote down the value of its Middle East energy business and announced a canceled contract in Chile worth $260 million.

With a trial approaching and a great deal on the line for this company, SNC will need every penny it can scrape together moving forward.

Given that the company now expects a second-quarter loss of $175 million, up from $150 million, before interest, taxes, depreciation and amortization, that could prove quite difficult.

There’s always hope with any stock, and SNC is no exception. The company’s reorganization is a smart move, and frankly one shareholders should have been expecting for quite some time.

The major disappointment is the cancellation of contracts, and of course the upcoming trials. SNC could be banned from Canadian projects for a decade if the bribery charges are founded.

But looking much, much further ahead, SNC has a backlog of projects around the world. If the company can prove beyond a reasonable doubt that it really has changed, then investors might be wise to take a small stake in this stock to see what happens.

If you do, however, be warned: it could get worse before it gets better. This is definitely a long-term play, and if you don’t have the stomach for it I certainly wouldn’t recommend buying up this stock.

After all, if the last decade is any indication, the future of this company could remain in a yo-yo pattern for years to come.