It’s been a long time coming for gold buyers. Gold could finally be making a comeback after almost a decade of trading well below where it once was.

Back in 2011, the price of gold peaked just shy of $1,900 an ounce before tumbling down to just below $1,300 per ounce by 2013. Since then, gold has been slowly climbing back towards that mark, which it surpassed just this month. The price of gold is now trading at about $1,960 per share as of writing.

That’s nothing compared to the U.S. price of gold, which is frankly what most investors are interested in. Back in 2011, the price hit around US$2,500 per ounce, before falling to about US$1,300 by 2016. Today, that price has climbed up to US$1,476 as of writing, leaving investors wondering if now is finally the time to get in on gold before the price explodes. 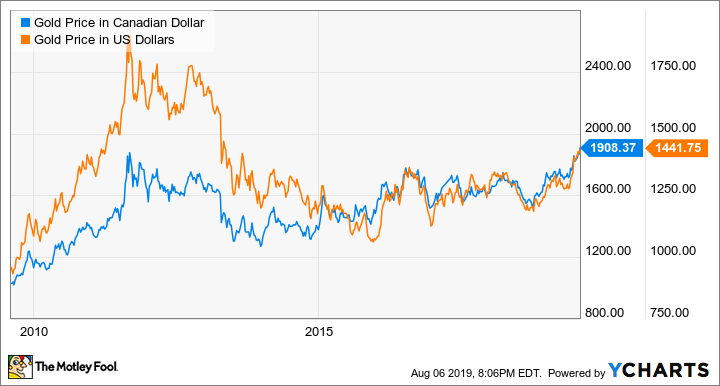 As Fool contributor Andrew Walker recently pointed out, “it has become evident that tariffs and the ongoing trade spat with China are having a negative impact on American companies and putting the global economy at risk.” This has led to a rate cut by the U.S. Federal Reserve after several hikes last year. After President Trump announced more tariffs on Chinese goods, gold is being bought up in force ahead of what will likely be another rate cut.

Analysts now believe the price could hit as high as US$3,000 by 2030, with some saying US$1,600 in the next 12 months. If this happens, which stocks should you have on your watch list?

Barrick Gold (TSX:ABX)(NYSE:GOLD) has seen much of the same trajectory as the price of gold in the last decade, hitting an all-time high around $55 per share before dropping by about 85% in 2015. Since that time, shares have climbed back up by 162% to around $23 per share as of writing but still are far off from that $55 price.

The gold rally has sent this stock up 31% year to date, and as the gold price improves, many investors may realize they’ve been ignoring a gold mine (pardon the pun). Barrick is now a mining titan after merging with Randgold Resources, with several high-quality projects on the books around the world. After reining in production during weak gold prices, the company has focused on lower-cost production, leaving Barrick with low costs and high revenue as the price of gold soars upwards.

Osisko Mining (TSX:OSK) may not have the grand status of Barrick, but it does have ample opportunity for growth. The stock almost reached $30 per share back in 2013 but now trades at around $3.58 per share. Yet that’s a 16% increase year to date, with analysts predicting the stock could almost double in the next 12 months.

This comes after the company made a series of announcements over the last year that have investors excited. Osisko discovered a new area of mineralization that is already 100% owned through its Windfall gold project in Québec. The company also looks to be planning further expansion, announcing a syndicate of flow-through shares of $10,000,000 for “general working capital purposes,” and a further $30,000,000 of flow-through shares issued when the share price reaches $5.67. Clearly, Osisko thinks it’s struck gold with this recent plan.

Anything can happen, but the way things are going — especially south of the border — gold could be in for a significant rally over the next year at least. This should likely send prices even higher for long-term investors and allow for a nice boost should Canada and the United States enter a recession. Both Barrick and Osisko are great options, but as always, do your own research and add them to your watch list before buying.