Quality banks should be considered part of your core stock portfolio because they offer nice and growing dividends with growing earnings that lead to steady price appreciation over time.

At the end of May, I wrote that Canadian Western Bank (TSX:CWB) was a top bank that’s often ignored but was a bargain stock for lucrative gains and safe juicy dividends.

Since that time, the bank stock has appreciated 18% in about three months, beating all the other banks. 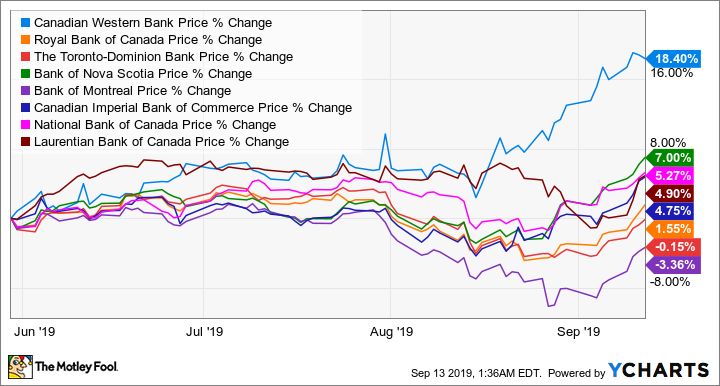 Data by YCharts. Price appreciation of the banks since the end of May 2019.

The bank is still very cheap versus its fair value. At about $33.30 per share at writing, the stock trades at about 10.6 times earnings, while a fair multiple is closer to 12.7 times. Therefore, upside potential of 21% still remains.

Moreover, the bank is estimated to grow earnings-per-share by 5-7% per year over the next three to five years, which will push its fair value higher.

Canadian Western Bank is a well-run bank with conservative lending practices. In most years, its provisions for credit losses (PCL) ratio is lower than that of the Big Six banks’ average. Even with elevated oil and gas losses in 2016, its PCL ratio was still only two basis points higher than the average.

The bank is good for a safe 3.4% yield today. It has increased its dividend for 27 consecutive years with a five-year dividend growth rate of 7.2%.

Maybe you’re more comfortable with a larger bank. If so, consider Scotiabank, which generates annual revenues of more than $27 billion versus Canadian Western Bank’s roughly $800 million. You’ll be exhilarated to know that BNS stock also trades at a substantial discount to its intrinsic value.

Scotiabank stock recently broke out, but still has about 16% to go before reaching its fair value. What’s more, the bank is positioned for higher growth in emerging markets where a large portion of the population do not have bank accounts, with leading positions in Pacific Alliance countries, such as Chile and Colombia.

With a strong growth profile, Bank of Nova Scotia’s fair value estimate is bound to move higher over time. As well, its dividend will continue growing by about 5-6% per year.

The international bank is good for a juicy yield of 4.9%. It has increased its dividend for eight consecutive years with a five-year dividend growth rate of 6.5%.

And lock in one of the lowest prices we’ve EVER offered!

Hurry, this sale will end at midnight…