Sitcoms — especially those that have stood the test of time — have become hot properties in recent years, as streaming services look to reinforce their original programs with shows that will keep viewers binge-watching while they wait for the next big original content release.

Earning the label of “known quantity” has made a number of these shows must-have properties, especially as a group of soon-to-debut streaming services looks to take on the incumbents.

With that in mind, here are three tantalizing developments in the streaming space from this past week.

1. Pretty as a Peacock

NBCUniversal, a division of Comcast (NASDAQ: CMCSA), announced the name of its upcoming streaming service and gave an estimate of when it will debut. The offering — which has been dubbed Peacock — will launch in April 2020. The name is a nod to the broadcast network’s iconic logo.

Earlier this year, NBC revealed that it had signed a deal for The Office, a hit show that ran nine years on the broadcast network. The program, which currently appears on Netflix (NASDAQ: NFLX), will be the centerpiece of Peacock’s offering when it returns to NBCUniversal in 2021. Reports suggest the company paid a whopping $500 million, outbidding Netflix, Disney-controlled Hulu, and Amazon to secure the rights to the fan-favorite program.

Peacock plans to stand out in the crowded field with a heady mix of original programming, news, sports, late-night, and reality shows. The streaming service will also offer a host of popular programs including 30 Rock, Bates Motel, Brooklyn Nine-Nine, Cheers, and Will and Grace, among others. It will also feature box-office hits from NBC’s Universal Pictures division and Spanish-language programming from Telemundo.

2. A show about nothing

There was much wailing and gnashing of teeth among Netflix investors when the company recently lost the streaming rights to two of its most popular series. After it ceded The Office and Friends to the competition, many were concerned that with the loss of these two headliners, Netflix subscribers would have no choice but to spend their streaming dollars elsewhere.

However, armed with billions of dollars for content and algorithms to guide its choices, Netflix has struck back. The tech giant reached a five-year deal with Sony — reportedly worth more than $500 million — to nab all 180 episodes of Seinfeld for its 151 million viewers around the world, beginning in 2021.

This illustrates just how savvy Netflix is when it comes to programming. The company secured a global streaming rights deal, while the agreements for The Office and Friends for NBCUniversal and AT&T‘s (NYSE: T) HBO Max, respectively, only covered domestic streaming — giving Netflix much more bang for its buck. And speaking of bang… 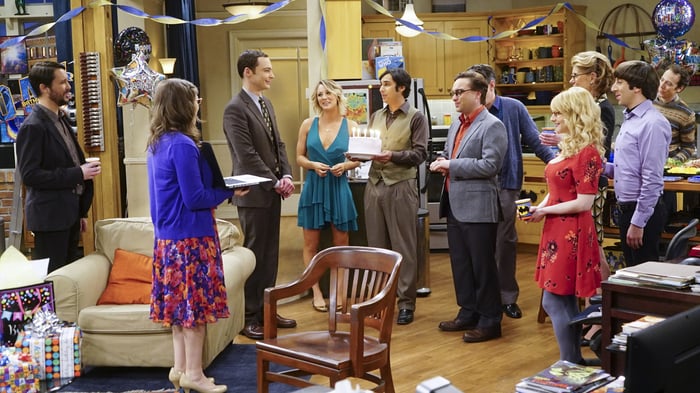 HBO Max scored another coup, this time winning the U.S. streaming rights to The Big Bang Theory. All 279 episodes will appear on the service when it launches in spring of 2020. While the terms of the agreement were not officially released, it was called an “easily record-setting five year deal” by The Hollywood Reporter, part of a “multi-billion dollar” agreement that included syndication rights to keep the show on WarnerMedia’s TBS network — also part of AT&T.

The comedy has become a global phenomenon since its debut in 2007. In its 12-year tenure on CBS, it became the longest-running multicamera comedy series, stealing the crown from Cheers. It was also CBS’s No. 1 scripted half-hour show among the important 18-to-49 demographic.

The addition of The Big Bang Theory and Friends has netted HBO Max two of the most-watched sitcoms of the past two decades.