Alphabet (NASDAQ: GOOG) (NASDAQ: GOOGL) subsidiary Google continues to dominate the U.S. search ad market, but Amazon (NASDAQ: AMZN) keeps chipping away at Google’s lead. The e-commerce company’s ongoing push into advertising is why Google former CEO Eric Schmidt once famously saidÂ that Google’s biggest competitor was Amazon, which is expected to generate a whopping $11 billion in ad revenue this year, according to eMarketer.

The bulk of that will be search ads.

eMarketer released fresh estimates this week on the U.S. search ad market, which is forecast to grow 18% in 2019 to $55.2 billion. Google will easily grab the majority with 73.1% of the market, while Amazon should trail as a distant No. 2. with 12.9%. Microsoft is expected to garner a 6.5% share; Amazon overtook Microsoft last year as the No. 2 ad platform in the U.S. 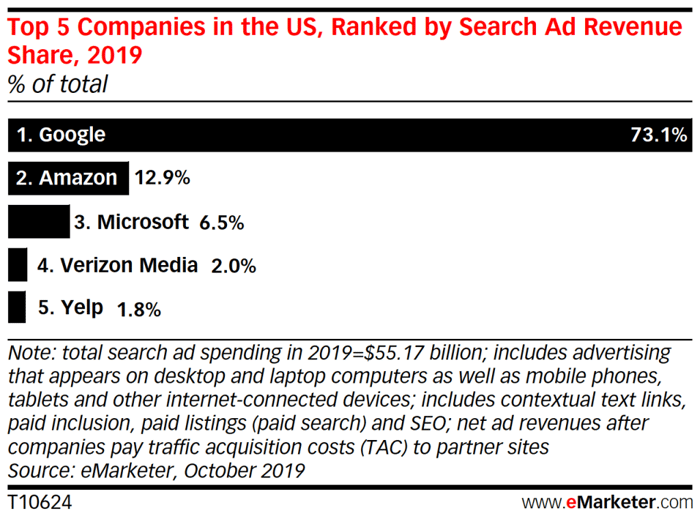 “Polling suggests that most product searches now begin on Amazon, causing the No. 2 search player to grow rapidly and steal share from its larger rival (though it is much smaller in comparison),” eMarketer writes. “In 2019, Amazon’s search business will grow nearly 30% over last year, boosting net search revenues to $7.09 billion.”

In other words, search ads should represent nearly two-thirds of the total ad revenue that Amazon will generate this year. It’s also worth noting that eMarketer is essentially echoing Schmidt’s comments from years ago. “People don’t think of Amazon as search, but if you are looking for something to buy, you are more often than not looking for it on Amazon,” Schmidt had said back in 2014.

Search ads for products are such a lucrative business for Google precisely because purchase intent is strong and Google knows exactly what you’re looking for, but now consumer behavior is shifting in a way that cuts the search juggernaut out of the loop.

“Amazon’s ad business has attracted massive increases in spending because advertisers can reach consumers during product queries, a time when they’re ready to buy,” eMarketer analyst Nicole Perrin said in a statement. “Amazon has also rolled out better measurement and targeting tools, making it even more attractive for advertisers.”

North America still represents the bulk of Amazon’s advertising business, but the company sees a lot of growth potential abroad as it makes those tools more broadly available. “A lot of the [advertising] tools that we’ve rolled out introduced in places like the United States aren’t available in many of the international regions,” Amazon head of investor relations Dave Fildes said in July.