The Motley Fool Canada » Dividend Stocks » A Recession-Proof Stock Being Thrown in the Bargain Bin!

Shopping mall food courts are convenient for people from all walks of life to grab a quick bite, to rest and refuel after doing errands or shopping, or to hang out with friends while saving some money, as you don’t need to pay tips.

Most of MTY Food Group’s (TSX:MTY) franchised or operated locations are in the food courts of shopping malls in North America. Over the years, it has acquired or developed a variety of brands from North American to Chinese, Japanese, Korean, Italian, Middle Eastern, etc. Currently, MTY Food Group has about 80 banners, including recent acquisitions of Papa Murphy’s, Allô! Mon Coco, and Yuzu Sushi, across 7,441 locations, of which 97.8% are franchised. 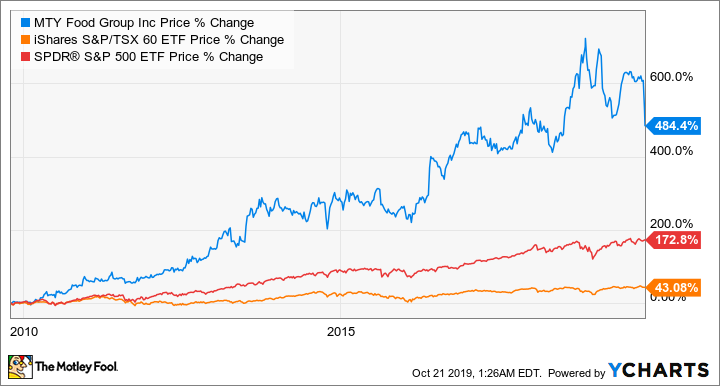 MTY data by YCharts. Comparing the 10-year price changes of MTY and the Canadian and U.S. stock markets.

In the first nine months of the year, MTY Food Group’s system sales and revenues climbed 25% and 35%, respectively, to nearly $2.6 billion and over $400 million. However, normalized EBITDA only increased by 16% to more than $108 million with a normalized EBITDA margin of 27.1%, down 4.5% from the same period a year ago. Free cash flow also increased by 16% to more than $77 million, while same-store sales were flat.

Concerns about lower EBITDA margins and flat growth have caused the stock to fall 24% in the last year. This has finally made the recession-proof stock more attractive for investors.

As mentioned earlier, eating at the food court is a good way to save money when you need to eat out. That goes for workers, students, or shoppers alike. That’s why MTY Food Group’s earnings and cash flows are recession proof. In fact, in the last recession, the company’s earnings per share actually increased, suggesting that its profitability may be recession proof. Its free cash flow generation also showed resilience in the recession.

It’s an excellent opportunity to gobble up MTY shares today. The stock is trading at under 17 times earnings at $52 per share as of writing, which is a decent valuation to buy the quality dividend stock that’s focused on growth. The analysts’ average 12-month price target indicates more than 21% upside potential — again, this suggests value is up for grabs.

MTY provides a small yield of about 1.3%, but it offers growth potential, including the above-average growth of its dividend. It’s almost doubled its dividend in the last five years, and it last hiked its dividend per share by 10% in January.

Its payout ratio is estimated to be roughly 21% this year’s earnings and about 16% of its free cash flow. So, there’s a huge margin of safety for its dividend and lots of room to increase the dividend in the future.

Eric Lefebvre became CEO when Stanley Ma stepped down from the position in November 2018. Lefebvre has been with the company for 10 years, including being CFO from 2012 to 2018. So, he knows the industry and company very well.

Fool contributor Kay Ng has no position in any of the stocks mentioned. MTY is a recommendation of Stock Advisor Canada.