To cap off its first day of operations, Disney (NYSE: DIS) announced that Disney+ launched with 10 million subscribers, sending shares of the media giant up 7% on the day of the announcement to new all-time highs. The high subscriber tally (which could drop by next week since the service offers a free seven-day trial offer) lent credence to the company’s plans to ultimately attract between 60 million and 90 million subscribers. Wall Street had been forecasting just 8 million subs for Disney+ by the end of the year, a goal the company has quickly dispatched.

Apple (NASDAQ: AAPL) debuted its streaming offering, Apple TV+, to much less fanfare on Nov. 1, and to date, investors are left wondering just how many subscribers have signed up. However, based on what we already know, Apple could easily close out its first year with more than 100 million subscribers, leaving Disney’s early viewer numbers in the dust. Here’s how Apple gets there — and why it won’t matter.

Apple recently announced that customers who purchase a new device — including an iPhone, iPad, iPod Touch, Apple TV, or Mac — would be entitled to one year of Apple TV+ for free. We can’t know with any certainty how many devices Apple will sell over the coming year, but historical records and analysts’ estimates can give us a good jumping-off point.

Aggregating iPhone, iPad, and Mac sales from fiscal 2018 — the last year for which Apple reported unit sales — the company sold a total of 279 million devices. Since then, however, iPhones have experienced year-over-year sales declines, the result of higher prices and economic weakness in China. The recent positive reception of the iPhone 11 has Apple optimistic it can ship more than 200 million iPhones next year.

Barclay’s analyst Tim Long said he expects Apple to sell about 222 million “hardware devices” over the coming 12 months. Each customer will be entitled to one free year of Apple TV+, and Long expects about half will sign up for the trial offer. By the end of that first year, subscriber churn will begin to take a toll, but new additions will more than offset the customers who opt out. 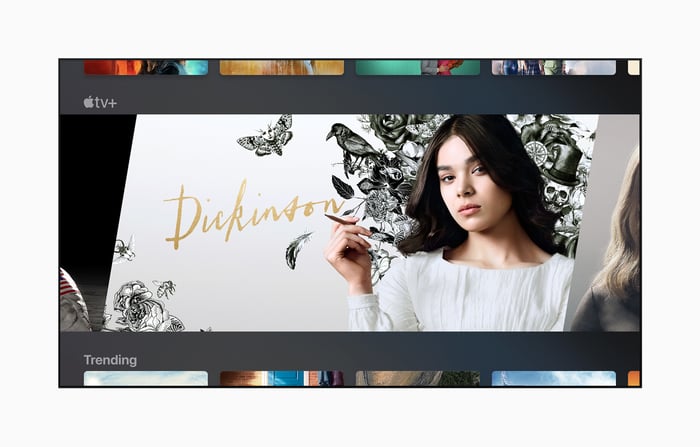 It sounds a lot like the tech giant will rob Peter to pay Paul, as the saying goes. In accordance with generally accepted accounting principles (GAAP), Apple will likely take the $60 cost of the annual subscription (about $5 per month), subtract that from its hardware revenue, then add the $5 monthly Apple TV+ subscription price to its services segment — essentially making the transaction a wash overall from a revenue standpoint.

Apple admitted as much, saying “We do not expect the introduction of Apple TV+, including the accounting treatment for the service, to have a material impact on our financial results.”

Apple is hoping that by giving away a year of its streaming service for free, it will encourage users who like its programming to renew while providing an incentive to customers who might be on the fence about buying a new iPhone.

Not an Apples-to-apples comparison

While most Apple TV+ subscribers won’t have any impact on Apple’s financial statements, Disney is another story. Assuming Disney+ is able to maintain the 10 million subscribers it attracted on Day One, Disney could bank as much as $838 million in the first year, all things being equal — which of course they aren’t.

Disney attracted many of its early customers with discounts and promotional deals, but since it has yet to launch in most international markets, its subscriber numbers have nowhere to go but up from here. This is merely fun with numbers, but it does illustrate that each Disney+ subscriber will be much more valuable to the House of Mouse than an Apple TV+ subscriber will be to the iPhone maker.

Additionally, Apple is only just beginning to build out its library of programming, with about a dozen shows listed on the Apple TV+ website. The iPhone maker will need a much more robust library of content to entice subscribers to stick around.

Disney+, by contrast, hit the ground running with 7,500 television episodes and more than 500 movies from its vault, as well as creating original, exclusive content, including 25 new series and 10 movies. Many of Disney’s most successful franchises and beloved characters are represented on Disney+, including those from its Marvel, Pixar, Lucasfilm, and Disney Animation studios, as well as some recent arrivals like The Simpsons and National Geographic.

Over the coming year, Apple could end up with way more subscribers, but Disney will be laughing all the way to the bank.