Among other things, China’s coronavirus outbreak has the market worried about the economic impact it’ll bring. This has helped drag down the WTI oil price by roughly 15% from about US$63 per barrel in early January to US$53 per barrel as of writing.

Canadian Natural Resources estimates to be able to increase its production by about 5% in 2020 to roughly 1,172 barrels of oil equivalent per day with capital spending of about $4 billion, while maintaining strong free cash flow generation.

In fact, the company is gushing so much free cash flow that after paying its current dividend, it estimates to have $2.4 billion each for stock buybacks and debt reduction!

CNQ stock has dipped about 6% since early January. This has made it a more attractive buy for income and price appreciation.

At writing, CNQ offers a decent yield of almost 3.9%. You’ll be reassured that the large-cap oil and gas producer has increased its dividend for 19 consecutive years through thick and thin. And its five-year dividend-growth rate was nearly 11%, which is interestingly high for an energy company.

Its five-year dividend yield history suggests that CNQ stock is a good deal when it yields close to 4%. 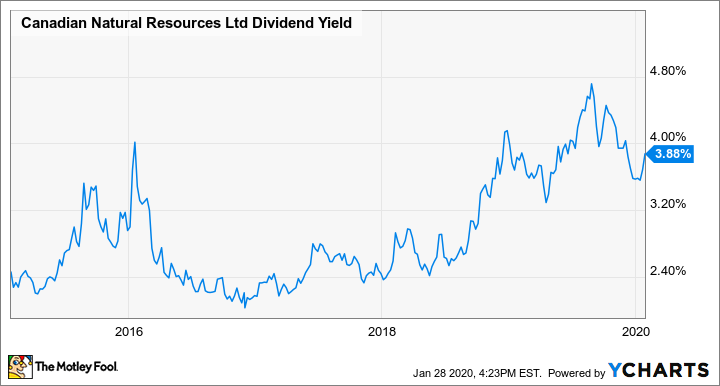 At about $38.70 per share as of writing, Canadian Natural Resources stock trades at a discount of about 17% from the 12-month average analyst price target of $46.60, which also represents compelling upside prospects of 20%.

The Canada Pension Plan Investment Board’s (CPPIB) support in TORC Oil and Gas is the biggest vote of confidence. The CPPIB, which invests for the Canada Pension Plan and the retirement funds of 20 million Canadians, has a strikingly large 29% stake in the company and continues to reinvest the monthly dividend back into the oil and gas producer.

That said, TOG’s dividend is not as safe as Canadian Natural Resources’s, as TORC has cut its dividend in the past as needed. However, it does offer greater upside potential.

Since early January, TOG stock has corrected about 17%. This has made TORC a more attractive buy. At writing, TORC Oil and Gas offers a whopping yield of 7.6%. Investors can somewhat feel at ease that the company increased the dividend by 13.6% about eight months ago.

At $3.92 per share as of writing, the stock trades at a discount of about 35% from the 12-month average analyst price target of roughly $6, which also represents an incredible price appreciation potential of more than 50%.

Whitecap is a similar idea to TORC Oil and Gas. It’s a mid-cap oil-weighted producer that has greater upside potential than Canadian Natural Resources but has a riskier dividend.

That said, Whitecap estimates that assuming a WTI oil price of US$55 per barrel, it’ll be able to generate sufficient cash flow to reinvest into the business as well as maintain the dividend with a payout ratio of 85% for 2020.

Assuming US$55 WTI, Whitecap’s payout ratio would be slightly better than TOG’s 87%. However, WCP would be more leveraged; its net debt to cash flow ratio of 1.8 times would be higher than TOG’s 1.3 times.

Since early January, WCP stock has declined by about 14%. At $4.83 per share as of writing, the stock trades at a discount of about 29% from the 12-month average analyst price target of $6.79, which also represents an incredible price appreciation potential of about 40%.

Eventually, the coronavirus outbreak will subside, at which time its weight on oil prices will be more or less lifted. Therefore, bargain investors can consider these energy names.

Keep in mind that CNQ is the safest of the three, but TORC and Whitecap can deliver greater upside potential.

Don't just stick to Canadian companies for a great dividend, consider these U.S. stocks you probably haven't even heard of.

Those looking to put $10,000 to work in this rather uncertain and volatile market may want to consider these three…

Here are two TSX stocks investors can consider for their TFSA contribution this year.

Two low-profile value stocks with strong upside are smart buys if you’re looking for investments outside the energy sector.

Here’s how Motley Fool investors can use their TFSA to create wealth for retirement, all from safe TSX dividend stocks.

These two TSX stocks have a strong history of growth and increasing dividends.

Are you interested in buying dividend stocks? Here are three TSX stocks with high dividend yields!