The price of Shopify (TSX:SHOP)(NYSE:SHOP) stock has mystified traders everywhere. The stock steadily and easily climbed on the exchange since its initial public offering (IPO) in April 2015. Then throughout 2019, Shopify stock entranced the attention of investors as the price rapidly climbed by over 200% from around $230 to $718. 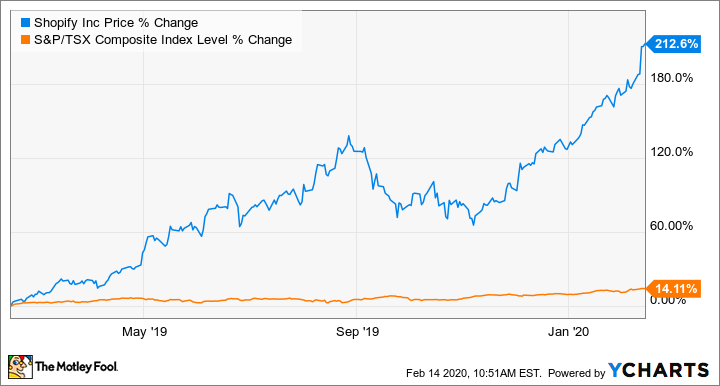 Many stock market analysts, including me, have been scratching our heads wondering, “what is going on?” The reason for Shopify’s outstanding performance is not entirely clear. The trailing 12-month earnings per share (TTM EPS) has only decreased throughout the past year to over negative $1.10 per share.

As Shopify’s free cash flow grew, the stock price climbed along with it. Then, toward the end of 2019, Shopify again reported negative free cash flow, which caused the stock to drop yet again from above $500 to around $400.

The fall in the quarterly free cash flow reports spooked investors. The stock price took a small tumble to just around $390 by the end of September. Speculation regarding upcoming earnings price action briefly caused a small rise in the price to $456.91 in the middle of October.

If it weren’t for the common stock issuance bringing in $688 million during the quarter ended in September, Shopify would have been forced to report a free cash flow of over $734 million or find another way to pay for investments.

Shopify consistently reports low to negative net income. For the quarter ended in December, net income was barely $771,000, which is practically nothing compared to the stock’s market capitalization. TTM net income is a whopping negative $124.842 million.

The primary profitability problem is Shopify’s negative operating margin of -8.94%. Investors should trade on growing profit margins, not free cash flow. Shopify’s stock value should be falling, not rising.

Fool contributor Debra Ray has no position in any of the stocks mentioned. Tom Gardner owns shares of Shopify. The Motley Fool owns shares of and recommends Shopify and Shopify.