ACB stock has been a major disappointment for investors. It has lost about 80% of its value in the last 12 months. It’s time for investors to move on (if they haven’t already).

Here’s a growth stock that has positive momentum. It broke out above $1.75 per share in late October and has already more than doubled from that level by appreciating 120% in a few months.

There are reasons to believe that this growth stock has further explosive upside, though investors should expect a wild ride.

If you think Shopify stock did well, you’ll be thrilled for the opportunity in this little stock that you probably have not heard of.

Xebec Adsorption (TSXV:XBC) only has a market cap of $329 million. The stock is more than a four-bagger from merely one year ago. While Aurora Cannabis has no profitability in sight, Xebec has. 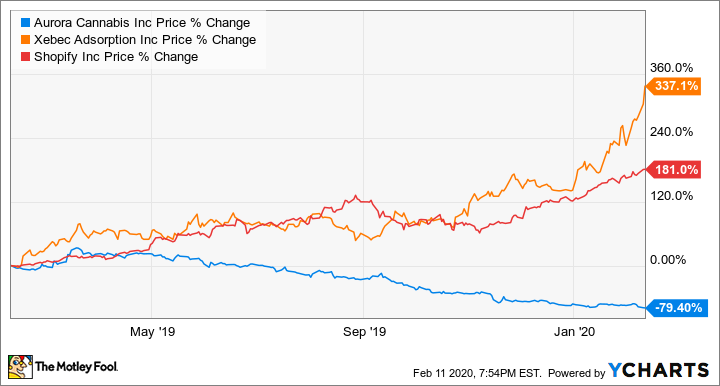 From revenue to profit

Let’s start by reviewing the small company’s sales, which have quadrupled in about three years. It was relatively easy for Xebec to grow its sales given that the number was quite small at about $9.6 million in 2016. In the trailing 12 months, Xebec reported sales of nearly $41.8 million.

It’s good to see that the cost of revenue has declined from 77% to 69% of revenue, allowing gross profit to increase from under $2.2 million to almost $12.9 million in a few years.

In the same period, Xebec’s research and development spending declined from $143,000 to $80,000, and operating expenses more than doubled but was an improvement due to declining from 45% to 24% of sales.

Specifically, management guides for roughly $4 million of earnings and approximately $6 million of EBITDA.

Why be bullish on the growth stock?

The market is bullish on the growth stock for multiple reasons. First of all is climate change. Governments, companies, and people in general are seeking greener alternatives to everything. And Xebec rides on the tailwind of this green trend.

Xebec has been in business for about 50 years — mainly in the industrial gas-purification space. Over the last 12 years or so, it has focused on renewable gases, including renewable natural gas and hydrogen.

Management expects the company to continue growing organically. It estimates 2020 revenue of about $85 million, net earnings of roughly $6.8 million, and EBITDA margin of 11-13%.

SoCalGas, which is the key natural gas provider in southern California, delivers energy to about 21.8 million consumers. It has a target of generating 20% renewable gas by 2030. (Other companies and regions including Oregon, Quebec, and British Columbia, also have targets by a certain deadline.)

In December, Xebec made a fitting acquisition of a California-based air and gas service company to provide North American service for its Cleantech systems and installations, which diversifies its revenue by contributing about $20 million of revenue.

Xebec expects this acquisition to be the start of its roll-up strategy to buy more service companies such that it can achieve its target of $30-35 million of annualized service revenue in 2020.

As of December, it also had about $100 million of backlog, up from $71 million in November.

Going forward, whether Xebec stock will do well would be a matter of execution that falls on management’s shoulder, whether companies and governments can follow through with their targets, and whether Xebec can do a better job than its competitors.

In any case, 2019 turned out to be a very rich year for Xebec and its shareholders. It’d be an interesting, perhaps explosive growth story to follow if not invest in for 2020 and onward.

1 U.S. Stock to Buy That Could Make You a Millionaire

Even though tech stocks are usually the go-to growth picks in the US stock markets, there are quite a few…

These dividend stocks have been a favourite for a while, but even more so now that they trade at such…

You can earn high passive income with dividend stocks like the Toronto-Dominion Bank (TSX:TD)(NYSE:TD).

This Canadian 6%-Yielder’s On Sale, But Not for Long!

SmartCentres REIT (TSX:SRU.UN) is a wonderful high-yielding REIT that has a higher yield and lower valuation than most its peers.

Why I’m Considering Canopy Growth Stock For My RRSP

As the cannabis industry grows, adding Canopy Growth stock to my RRSP will give me access to massive upside.

Monthly Passive Income: Is RioCan a Buy for the 4.75% Yield?

RioCan raised the monthly distribution this year after cutting the payout during the pandemic. Should investors seeking monthly passive income…

ALERT: 3 Cheap Stocks That Have Sent Off a Buy Signal

Canadians on the hunt for cheap stocks should snatch up CAE Inc. (TSX:CAE)(NYSE:CAE) and others that are technically undervalued right…

3 Canadian Growth Stocks for Your TFSA

Given their healthy growth prospects, these three stocks would be a good addition to your TFSA.