Home » Investing » Coronavirus » 2020 Stock Market Crash: Do Not Fear: We’ve Been Here Before

The 2020 stock market crash is far from over. Many investors are probably feeling butterflies in their stomachs by now, and may even have trouble sleeping at night.

Relatively new investors who haven’t experienced a market crash before may not know what to do with their stocks in deep red. What’s worse? The markets may have fallen to a point that’s passed their pain threshold — and have already sold at a loss.

I hope I wrote this article in time to stop investors from selling stocks of great businesses at a loss.

The stock market has appreciated in the long run, and this time should be no different. 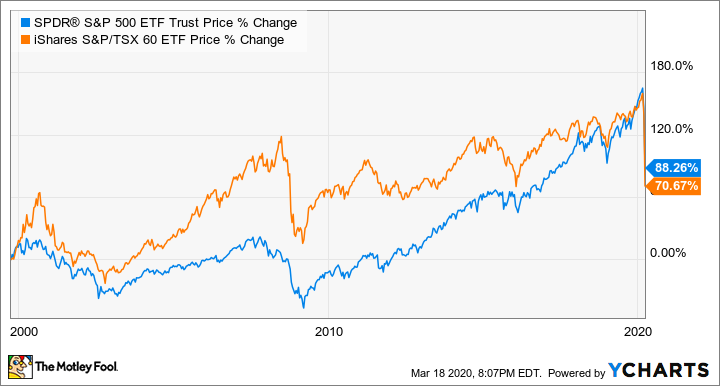 It’s true that the stock markets crash for different reasons each time. But it’s also a fact that the markets will eventually rise stronger than ever – every single time.

The stock market crash of 2008 was triggered by a financial crisis that spawned from subprime mortgages. From the peak of the market (before the market crash) to the low in early 2009, the U.S. market, specifically, S&P 500, fell more than 52%.

Thus far, in the 2020 stock market crash, the S&P 500 has only fallen 29% from its peak. Moreover, the February 2020 peak was more expensive than the November 2007 peak. Specifically, it was more expensive by about 11% based on their price-to-earnings ratios (P/E).

In the last bear market, it didn’t feel like a market crash until the steeper drop of more than 42% from September 2008 to April 2009, a period of about eight months.

The 2020 stock market crash has been much quicker and the drop steeper. In a month, the market lost about 30% of its value.

What triggered the crash was the global coronavirus crisis that’s crippling the world economies. My guess is this will be a more severe crash than the 2008 crisis.

First, as I mentioned, the stock markets were relatively expensive before the crash. Now, mid-way through the crash, the U.S. market trades at a P/E of about 14.3, which is undervalued. However, if global recessions are triggered by this crisis, the multiple is going to expand due to compressing earnings.

Second, country leaders are rightly placing top priority on fighting the virus — but at the expense of halting tonnes of economic activities.

Travel and tourism industries took a direct blow to the stomach. Service, retail, and manufacturing sectors are also hit due to temporarily closed stores to combat the coronavirus.

This affects retail REITs, which probably have to freeze or reduce rents to prevent tenants from going bankrupt. Of course, economies turning south impacts banks, which lend money to people and businesses. If businesses go bankrupt and people are laid off, who’s going to pay back the loans?

There you have it. That’s why the global stock markets are tanking.

Eventually, the global economies and stock markets will recover. It could be a vaccine or the flattening of the curve.

If you hold stocks of wonderful businesses, don’t sell at a loss, because they will recover, too, and rise stronger and higher!