The S&P 500 hit a record high on Tuesday, as the markets have continued to defy the COVID-19 pandemic. Despite recessions in both Canada and the U.S., the markets continue to perform well. But one stock that’s lost some traction of late is Shopify (TSX:SHOP)(NYSE:SHOP). At around $1,350, the stock has fallen from the 52-week high of $1,472.98 it reached earlier this year. And while it looked like $1,500 was inevitable for the big, Ontario-based tech stock, that momentum has cooled in the past week, even as the S&P 500 has continued to climb.

With the markets reaching a high, Shopify investors may be worried that their stock may not have a whole higher to go, either. Already the most valuable stock on the TSX with a market cap of around $160 billion, it may be a big ask for investors to expect to continue generating positive returns from here on out.

Even though Shopify reported a stellar second-quarter result on July 29, where its sales were up 97% year over year, that hasn’t been enough to fuel the stock higher. Here’s how it’s done in just the past month: 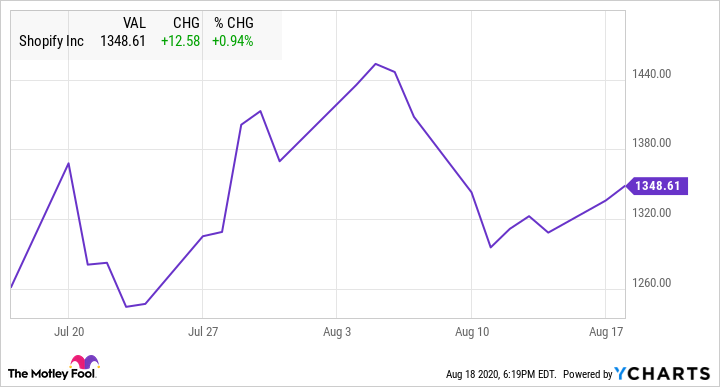 The rally that Shopify benefited from after its strong quarter was short-lived, and it’s a possible sign that as well as the company’s been performing, investors may not be willing to pay much more of a premium for the stock. And with many cities reopening around the world and potentially fewer people staying indoors and shopping online, the company’s third-quarter performance may not be as strong as Q2 was.

Although shares of Shopify have continued to rise over the years, the stock’s ascent has also been due to the company’s rapid sales growth. But today, investors are also paying much more of a premium for the stock than they have in recent years:

Can the stock climb higher?

It’s been a strange year thus far, and Shopify’s stock has continued to defy reason. With the markets at a high, Shopify trading at around 60 times its sales — also near a high — and some tougher times around the corner, as mortgage deferrals come to an end and people are transitioned off of CERB, where presumably fewer people are collecting benefits, it could be a perfect storm coming. And highly valued stocks like Shopify could be among the most vulnerable investments to be holding if there’s another crash in the markets.

Unless there’s a quick economic recovery and the COVID-19 pandemic suddenly disappears, it’s hard to see a scenario where there’s a reason to be more bullish about where the markets are headed. And that’s likely going to be the biggest impediment to Shopify stock continuing to rise in value. The bullishness may finally be coming to an end, and that’s why I wouldn’t risk holding shares of Shopify right now. Hanging on too long could put a dent in your profits, and buying today could put you at risk of incurring losses.

There are better, cheaper stocks to buy than Shopify that can offer good returns with much less risk. This latest decline in price could be the beginning of a much larger correction in Shopify’s share price.

Fool contributor David Jagielski has no position in any of the stocks mentioned. Tom Gardner owns shares of Shopify. The Motley Fool owns shares of and recommends Shopify and Shopify.