Home » Investing » Will a Tech Bubble Burst Cause Shopify (TSX:SHOP) Stock to Crash?

During the Internet Bubble or Dotcom Bubble in the late 1990s, public companies that had operations related to the internet appreciated rapidly in a short time.

Eventually, the bubble burst, which witnessed the NASDAQ crashing nearly 77%. Many investors’ wealth was wiped out swiftly. It then took more than a decade for the NASDAQ to regain its height with countless constituents replaced since the Internet Bubble.

NASDAQ’s top 10 constituents today are all tech stocks. Five were already publicly listed companies during the Dotcom Bubble, while the rest, including Facebook, Alphabet (both classes of shares), Tesla, and Netflix became public companies after.

A number of tech stocks are trading at high valuations. Here are a few of them, with Shopify (TSX:SHOP)(NYSE:SHOP) leading the pack. 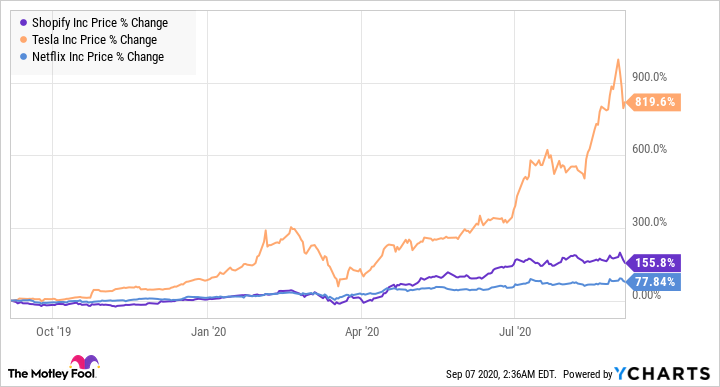 In the past 12 months, Shopify stock appreciated 155%. The tech stock now trades at a forward price-to-earnings ratio (P/E) of 287 times, a forward enterprise value to EBITDA (EV/EBITDA) of 104 times, and a forward EV/sales of 38 times. Shopify’s estimated earnings-per-share growth rate is 25% per year over the next three to five years. So, its PEG ratio is more than 22.

In the same period, Tesla stock climbed 819%. Interestingly, it trades at a forward P/E of 149 times, a forward EV/EBITDA of 59 times, and a forward EV/sales of 10 times. Therefore, the stock is not nearly as expensive as Shopify. Some analysts believe its growth rate is higher, too.

Netflix stock has also outperformed the North American stock markets by rising 77% in the past 12 months. The stock trades at a forward P/E, forward EV/EBITDA, and forward EV/sales, respectively, of 67 times, 44 times, and 9 times. Netflix is estimated to increase its earnings per share by 30-35% per year over the next three to five years. So, its PEG ratio is about 2.9.

Will a tech bubble burst cause Shopify stock to crash?

With certain tech stocks like Shopify, Tesla, and Netflix trading at such high valuations. Their near-term upside could be nil, while their near-term downside risks are massive.

A change of sentiment can cause a destructive tidal wave to their stocks. Any negative event can trigger a selloff in these stocks. For example, when the Dotcom Bubble burst, Amazon stock dropped more than 80%.

If you think that kind of crash is impossible for Shopify stock, declines of 20-30% are certainly in the cards.

Shopify is one of the most expensive stocks on the market. It has strong price momentum. Even though it’s so pricey, shareholders are unwilling to part with it, and therefore the stock has only gone essentially sideways since late June.

In the next year or so, there could be a burst in the bubble. If it retreats, interested investors should start buying on a correction of more than 20%. If a bigger crash follows, it should be seen as an incredible opportunity to accumulate shares in the amazing growth stock.