Shopify (TSX:SHOP)(NYSE:SHOP) stock has gained a huge following over the last few years. It has already been bid up — climbing more than 800% in the last three years — and is now very expensive.

The tech stock is more likely to consolidate or dip in the near term before the next leg up. Therefore, if you already hold the stock, it’s time to shove it in the closet and forget about it.

If you’re not convinced, here are the facts. Shopify stock constantly flirts between the first and second place as the priciest software as a service stock based on next year’s estimated earnings. It trades at about 300 times its forward price to earnings ratio!

Buy this growth stock instead

If you already hold Shopify stock, forget it for now and consider this growth stock instead. Xebec Adsorption (TSX:XBC) is an entirely different company, but its recent top-line growth rate was greater than Shopify’s.

Shopify’s last 12-month’s revenue growth versus what it was a year ago was 60%, while Xebec Adsorption’s was 65%.

This year, Export Development Canada (EDC) recognized Xebec as one of the most innovative cleantech companies in Canada. The support from EDC will allow Xebec to grow with lower risk, and Xebec has plans to grow for the next five to 10 years.

Xebec has more than 50 years of experience in air and gas purification. Its trailing 12-month revenue stands at $58.56 million, while it has more than $85 million in order backlog that validates its proprietary technology.

Both Shopify stock and Xebec stock have done very well in the last 12 months by appreciating 190% and 165%, respectively. 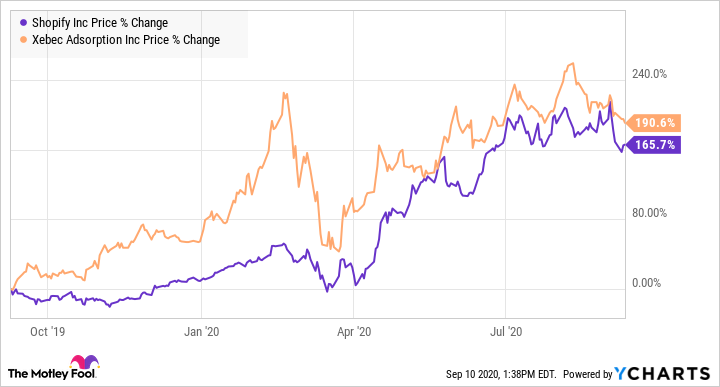 If you already own Shopify stock, keep holding it. It’d be a good idea to consider adding to the growth stock after it consolidates for some time or experiences a correction. Meanwhile, divert your attention to Xebec Adsorption and see if it makes sense for your stock portfolio.

At writing, Xebec trades at $4.04 per share, while the analysts’ average 12-month price target is $5.51, representing upside potential of 36%. This is only the near-term target. As Xebec proves itself and the RNG industry grows, the growth stock will have greater upside.

The time is ripe to invest in Xebec as the world shifts to renewable and green energy over the next decades.