It’s almost the end of earning season, and that means it’s time for the big banks to start reporting their results for the past quarter. Royal Bank of Canada (TSX:RY)(NYSE:RY) will release its first-quarter results for fiscal 2021 in a few weeks on Feb. 24.

The company is coming off a fairly decent fourth quarter where its earnings for the period ending Oct. 31, 2020, came in at $3.2 billion and were up around 1% from where they were a year ago. RBC’s provision for credit losses was $427 million, which was down 37% from the previous period’s tally of $675 million, suggesting that the bank’s outlook for the economy is improving.

However, the quarter wasn’t without its challenges, as RBC reported a 21% earnings decline in personal and commercial banking, and profits from its wealth management segment were down 15%. But the drop in wealth management was mainly due to a gain that propped up its bottom line a year ago.

Should investors expect better results from RBC in Q4?

In recent months, with COVID-19 case numbers spiking, many provinces have tightened up restrictions. That could make the upcoming quarter not a particularly strong one, as fears about the pandemic have likely been keeping more Canadians at home during the period. And that might have resulted in RBC’s and corporate clients struggling over the past three months.

There’s little reason to expect things will get a whole lot better for RBC, and there’s a chance the quarter could be a bit worse than Q4. It could take some time before the economy gets back to where it was before the pandemic (assuming it ever does).

Is RBC stock too expensive?

Even though the economy is nowhere near a full recovery, shares of RBC are trading near their 52-week highs as if all is well with the business. In the past six months, shares of the top bank are up 12%, and it is now trading at a price-to-earnings ratio of around 14. That’s close to its five-year high: 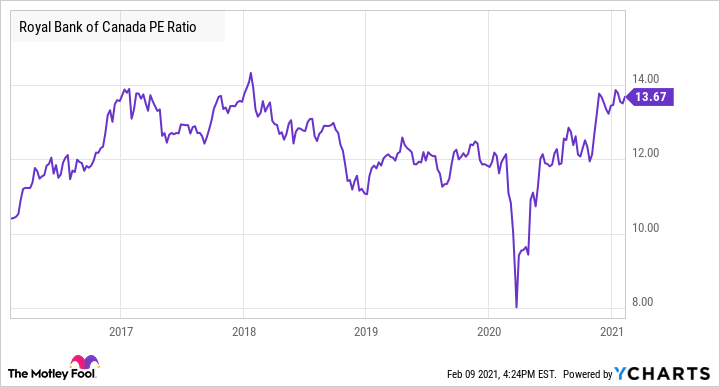 Should you buy shares of RBC, anyway?

If you’re planning on investing in RBC for the long term, then now may be as good a time as any to invest in the stock. While it may dip in the coming months, especially if concerns around the economy begin to rise, over the long term, those issues will subside and the stock will be back on a more positive trajectory. And with a dividend yield of around 4%, there’s plenty of incentive to buy the stock sooner rather than later to start collecting that payout.

But if you’re counting on the stock getting a big bump in price on a good earnings report — you shouldn’t. Between the stock’s stable business and high valuation, RBC isn’t an investment that makes large moves, even if the bank performs well. That’s part of the reason it makes for an attractive investment to hang on to for not just years but decades.