So many investors know about Shopify and Lightspeed. Some believe that Lightspeed stock is a better buy than Shopify stock. Here’s a relatively unknown tech stock that isn’t in the limelight but has outperformed both tech stocks and is still a bargain!

Converge (TSX:CTS) stock has flown higher than both LSPD stock and SHOP stock in the past year and three years. Over three years, the little gem has made its stockholders massive amounts of money. It turned an initial $10,000 investment into $131,000, a 13-bagger!

The stock came from a small base, earning almost 18 times its revenues in the period! That’s approximately 162% of revenue growth at a compound annual growth rate (CAGR) from 2017 to 2020.

Below is a chart that compares the past year’s price action of the three tech stocks Converge, LSPD stock, and SHOP, which provides a more realistic picture, since Converge is a larger company now and has graduated from the TSX Venture Exchange to the TSX. 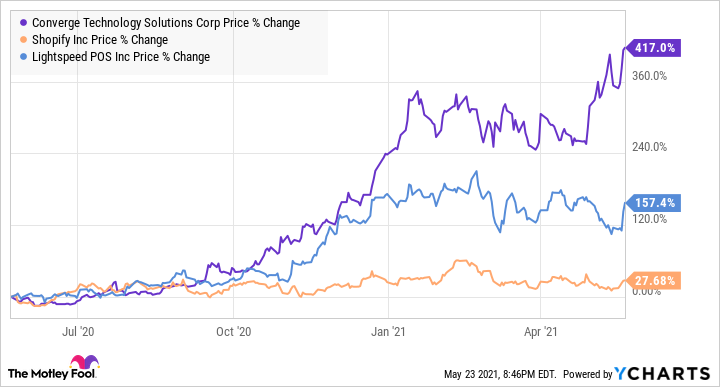 Growth of the tech stock

Converge is one of the fastest-growing IT service providers in North America. It offers hybrid IT solutions to the mid-market and has been employing a successful M&A strategy due to its cross-selling and integration capabilities.

Because of its focus on the mid-market, it’s able to provide more customized technical workshops and executive briefings for its clients and potential customers, thereby, excelling in cross-selling.

The IT company’s trailing 12-month revenue stands at just north of $1 billion, which is still a nice growth rate of 34% year over year. Its market cap stands at more than $1.2 billion. In Q1 2021, it reported adjusted EBITDA of almost $19 million, an increase of 71% from the prior year’s quarter.

The company is extending its M&A success in North America to Europe and has invited Thomas Volk, who is a senior executive with unique experience leading global enterprises and mid-market companies to join its board of directors, which will help with the expansion into Europe.

Partnering with IT behemoths

Converge has the expertise to develop customer solutions with IBM and Intel technologies. Converge was the recipient of five IBM awards this year, including the IBM Beacon Award, the Top North America Sell Business Partner of the Year, the Top North America IBM and Red Hat Synergy Partner of the Year, the IBM Data and AI Business Unit Excellence Award for Cloud Pak for Data, and the IBM Business Unit Excellence Award for Protect: Digital Trust.

Additionally, Converge recently achieved Titanium partner status with Intel. The press release noted that the status is reserved for the most valued program members who demonstrate superior business and technical skills as well as leadership in the development of innovative customer solutions based on Intel technologies.

Since analysts have started covering the tech stock, they have been steadily increasing its price target. Currently, they estimate Converge stock will be worth $10.11 per share over the next 12 months for incredible near-term upside potential of 33% from $7.60.

The stock is volatile, though. For example, it could easily correct to $6.50 per share with no material reason. If it does decline to that level, it could be a superb investment opportunity for growth over the next few years.

These small-cap stocks could also do very well over the next few years.