After a long bear market in uranium shown via the Global X Uranium ETF chart below, it’s showing signs of a potential turnaround. The ETF’s top 10 holdings include Cameco (TSX:CCO)(NYSE:CCJ), NexGen Energy (TSX:NXE), and Denison Mines. 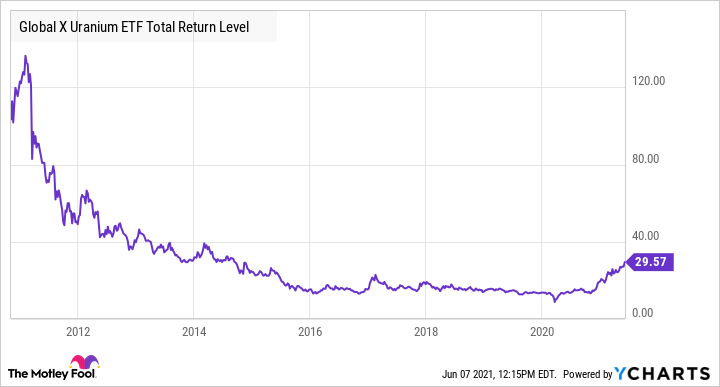 Some investors believe a uranium bull market has just begun this year. One of the largest global providers of uranium is Cameco. The stock has appreciated more than 50% year to date.

As the world population grows, energy demand is expected to persistently increase. Uranium as a source of energy is a part of that solution. The usage of uranium supports the world’s shift to carbon-free energy. While the U.S. is the largest nuclear power generator, accounting for about a third of global nuclear power, China and Japan are the fastest-growing nuclear power markets.

The International Energy Agency projected nuclear energy to remain a low-cost, low-carbon generation for the medium term. “Electricity produced from nuclear long-term operation… is highly competitive and remains not only the least cost option for low-carbon generation… but for all power generation across the board… Nuclear thus remains the dispatchable low-carbon technology with the lowest expected costs in 2025.”

Since Cameco is a large player with a market cap of more than $10 billion, it’s not surprising that it’s already trading at full valuation according to analysts’ 12-month price target. If uranium prices continue to head higher, it would be no problem for investors as price targets for Cameco stock will simply be revised higher.

Analysts believe they have a near-term upside potential of about 10% and 54%, respectively. But again, if uranium prices cooperate, their targets will be increased.

NexGen is headquartered in Vancouver with a focus on acquiring, exploring, and developing Canadian uranium projects. It has a highly experienced team of uranium industry professionals with a successful track record in the discovery of uranium deposits and in developing projects from discovery to production.

The company owns a portfolio of prospective uranium exploration assets in the Athabasca Basin in Saskatchewan.

In NexGen’s May presentation, it quoted Bill Gates, “Nuclear is ideal for dealing with climate change because it is the only carbon-free, scalable energy source that’s available 24 hours a day.”

Buying individual uranium producers could be risky, especially if you buy small players with small mining portfolios or haven’t started producing yet. If you’re bullish on uranium prices, buying a uranium exchange-traded fund like Global X Uranium ETF would provide much more diversification and reduce the risk of your investment.

You can also consider another similar uranium ETF that trades on a Canadian stock exchange: Horizons Global Uranium Index ETF.