Home » Investing » Tech Stocks » Move Aside, Shopify: This Is the New Hot Tech Stock in Town!

Investors who love Shopify stock will want to check out this new hot tech stock in town: Converge Technology Solutions (TSX:CTS). Here’s how their returns compare on a $10,000 initial investment over the last 12 months. Converge has been amazing — delivering a seven-bagger in that time! 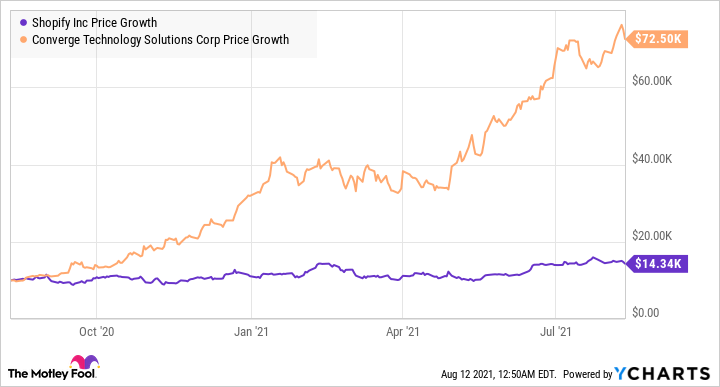 Converge only started breaking out in late 2020. And its market cap is just over $2 billion. So, it is in its very early innings of growth. As you probably know, the earlier you get in a growth stock, the more substantially you can grow your wealth. Early investors of Shopify stock, say, from five years ago, would be sitting on more than $350,000 from an initial investment of $10,000.

Converge continues to execute with solid growth. It just reported its second-quarter (Q2) results yesterday after the market closed.

Specifically, the tech stock reported revenue growth of 52% to $345 million versus Q2 2020. According to the Street consensus, this is a beat of 20%! I expect the stock to pop this morning, but either way, the hot stock is worth your time to investigate for a potential position.

The top-line growth led to a gross profit increase of 43% year over year to $78 million. Importantly, its adjusted EBITDA, a cash flow proxy, jumped 86% to almost $22 million.

Management noted that Converge’s recent acquisitions of Vicom Infinity and Infinity System are not included in the results, because it has yet to close the acquisitions. They would add revenue of about $55 million and adjusted EBITDA of almost $4 million.

How the tech stock is growing

The tech stock has been growing incredibly via acquisitions and integrations. So far, it has completed more than 20 acquisitions. In the process, Converge has expanded its set of products and services across digital infrastructure, advanced analytics, cloud, cybersecurity, managed services, and IT talent acquisition.

Converge is superb in its cross-selling ability. Its targeted mid-market clients often don’t know how they could benefit from additional IT investment. Its targeted workshops help explain the advantages and boost sales by cross-selling.

The tech company has no long-term debt on its balance sheet. Because its stock has reflected the business’s strong results, it has been able to raise capital through equity offerings on a rising stock price. This is an excellent way to raise funds to grow the business without borrowing, which weighs down the balance sheet.

Based on its recent acquisition activity (including the announced acquisitions that are yet to close), Converge’s forward revenue is about $2 billion.

Converge just achieved another milestone this month — completing its first European acquisition that opened it to the market in Germany. Investors should particularly keep an eye on the execution of its European expansion.

Management has its sights set on achieving $5 billion in annual revenue by the end of 2025. Its multi-year goal also includes EBITDA margin expansion to 10% and improving the revenue quality by growing software and services to 60% of total revenue.

There is lots to like about the tech stock. If its track record is indicative of its future, investors can expect a long growth runway.