Apple (NASDAQ:AAPL) has been a super growth stock. If you have owned the tech stock for a long time, say, since 2006, a $10,000 investment would have transformed into more than half-a-million dollars! The tech stock essentially delivered an incredible rate of return of more than 30% per year in that period! Even the best stock investors couldn’t get that kind of return for the long haul.

Apple is still growing at an impressive clip. In late July, it posted fiscal year-to-date revenue growth of 35% and diluted earnings-per-share growth of 72% with double-digit net sales growth across all categories (i.e., iPhone, Mac, iPad, Wearables, Home and Accessories, and Services). However, the company is massive today, flirting with a market cap of US$2.5 trillion. This makes it increasingly hard for it to grow.

Most importantly, at US$149 and change per share, AAPL stock isn’t exactly cheap at a blended price-to-earnings ratio of 26.6. The valuation is full, assuming the massive growth experienced recently is unlikely to replicate in a similar fashion over the next few years. That said, I wouldn’t count out the quality business that has made its long-term shareholders rich. So, I’d consider AAPL stock a “hold” at the current juncture.

Young company Converge was founded in 2016. It is helping mid-market clients with their technology solutions. And it has been executing M&A to expand its offerings. Its M&A and cross-selling strategy has been incredibly successful so far. Converge originally made acquisitions in North America and recently extended its M&A efforts into Europe. Its offerings include digital infrastructure, cloud, managed services, cybersecurity, advanced analytics, and IT talent acquisition.

The tech stock’s market cap is only about $2.3 billion. Last quarter, it boosted revenue by 52% and increased adjusted EBITDA by 86% versus a year ago. If Converge’s M&A and cross-selling continue to be as successful as before, it has a long growth runway. The stock still trades at a decent discount at writing with analysts anticipating 12-month upside potential of approximately 25% from the $11-per-share level.

WELL Health has a market cap of about $1.4 billion. It is early on in its journey to digitize the healthcare industry. It is still ramping up its business with acquisitions. This month alone it has acquired a majority stake in WISP, a fast-growing digital health leader that specializes in women’s health. As well, its subsidiary, CRH Medical continues its M&A momentum by acquiring majority stakes in two anesthesia practices in the state of Florida.

You can see the company’s massive growth in its recent results. For example, its trailing 12-month revenue growth was over 200%. Management is projecting the run-rate annualized revenue and adjusted EBITDA to be approximately $400 million and almost $100 million starting in Q3. Notably, the tech stock is super cheap; analysts think an upside of roughly 70% is possible over the next 12 months from below $7 per share at writing.

Evidently, Apple stock is a good large-cap investment that outperformed the North American markets. However, the graph below shows how Converge and WELL Health could outperform even more. Of course, past performance is history, but it gives a glimpse of the wealth-creation potential that smaller-cap tech stocks could bring. Simply put, Converge and WELL Health have a higher chance of doubling sooner than Apple. 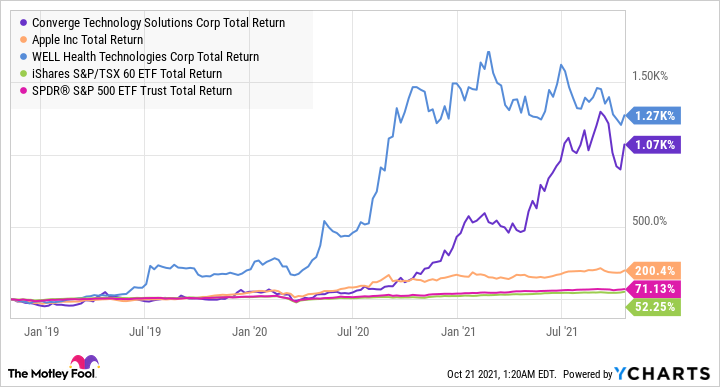 If you’re not ready to commit big bucks to smaller tech companies like you would in proven tech stocks like Apple, it might make sense to start a small position to gain exposure to extraordinary long-term growth potential.

Buying stocks and holding them for a long time can help investors to generate a significant amount of wealth. With…

Not all Canadians may be willing to invest in TSX stocks today with the market near all-time highs. The Canadian…

Top TSX Growth Stocks for December and Beyond

As we head into December, TSX stocks are seeing a new spike in volatility. Many stocks have outperformed expectations in…

1 EV Stock That Could Make You Richer Than Rivian Could

Rivian Automotive (NASDAQ:RIVN) is one of a slew of new initial public offerings (IPO) target the electric vehicle (EV) market…