Stock investing can be a core part of your retirement planning. Long-term stock returns have historically proven to outperform other asset classes. For the long haul, the stock market has returned about 7% per year. Here are a couple of Canadian stocks that have popped recently, and they have way more upside potential than 7% over the next 12 months.

Let’s check them out.

Dye & Durham (TSX:DND) provides a range of products for legal and business professionals to access public records. The tech stock lost altitude after it backed off from its privatization intent. In May, the company announced it intended to take itself private for $3.4 billion (i.e., $50.50 per share), but when that didn’t go through, the tech stock descended roughly 20% over the course of two months.

The growth stock has been growing by acquisitions. Since its initial public offering, it has seemingly easily beat market returns by almost a double. 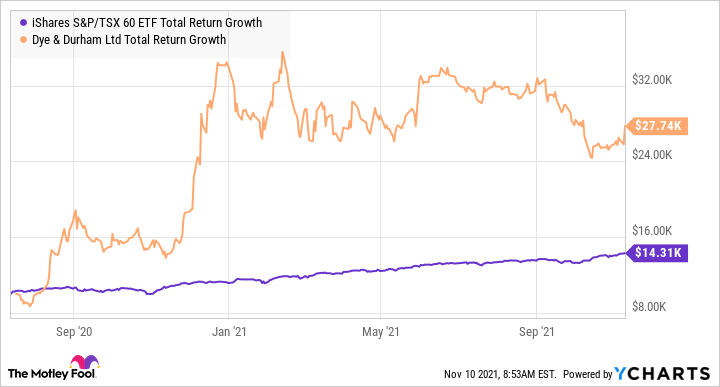 The tech stock popped 7.5% yesterday after reporting positive fiscal first-quarter 2022 results this week. Specifically, revenue increased incredibly by 414% to $112.6 million thanks to acquisitions and integrations that occurred in the last 12 months. Net income was $22.1 million — a stark difference of the loss of $15 million reported a year ago. Adjusted EBITDA, a cash flow proxy, was $62.4 million, roughly five times what it was year over year predominantly from the realization of revenue synergies from acquisitions.

For its growth potential, Dye & Durham remains undervalued at the recent quotation of under $41 per share. Over the next 12 months, buyers today could be well rewarded with an appreciation of approximately 33%!

If you just look at the stock price of Canadian Tire (TSX:CTC.A), you can’t tell that it’s resilient. Investors were probably shocked that from the 2019 levels, the dividend stock declined more than 40% during the pandemic. However, interestingly, its diluted earnings per share only ended up declining 2% last year. As a result, from the depths of the pandemic market crash, the stock came roaring back by more than doubling investors’ money.

In fact, it soared above the $200-per-share level in May. It has since declined by about 13% for interested investors looking for a nice entry point. The retail stock popped about 6% from last month, but it is still cheap and can rise approximately 22% over the next 12 months.

The dividend stock could rally as soon as tomorrow when it reports its third-quarter results in the morning. The market will be looking out for its revenue and earnings growth, which should remain strong especially with its e-commerce efforts that have been growing its online sales faster than its brick-and-mortar retail sales across its umbrella of brands.

Other than being undervalued, investors should be reassured Canadian Tire is a Canadian Dividend Aristocrat that has increased its dividend by about 15% on an annualized basis since 2004. Even last year, when many businesses were disrupted, the proven stock was able to healthily increase its dividend by 8%. Currently, it yields 2.5%, which is a nice bonus on top of its price appreciation potential.

3 Blue-Chip Stocks on My Radar

A new year is fast approaching, and we know what that means: it’s time to start planning out your finances…

Should You Avoid Air Canada Today?

If you live in Canada, you’ll most likely have heard of Air Canada (TSX:AC). This company is the largest airliner…

2 Top Value Stocks to Buy and Hold for 20 Years

Despite the recent pullback, the S&P/TSX Composite Index is up by 18.45% year to date. The equity market is shy of…

The impact of COVID-19 on the stock market in 2020 was severe. Fortunately, the TSX bounced back remarkably and even…