Lightspeed (TSX:LSPD)(NYSE:LSPD) stock is sometimes referred to as a smaller version of Shopify stock. The tech stocks have even moved in tandem at times. For example, as the graph below illustrated, in the last 12 months, the commerce stocks moved more or less together through August 2021. 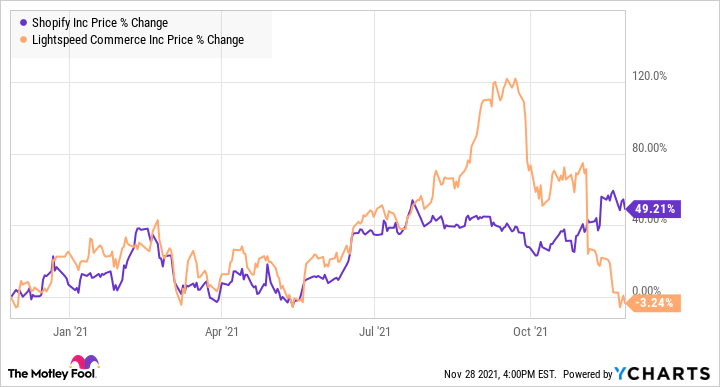 Around August 2021, Lightspeed stock raised US$716 million of gross proceeds from selling treasury stock at US$93 per share. Therefore, it did not dilute the stake of existing shareholders. In any case, that was a relatively high and good LSPD stock price to raise funds at. The tech stock did go on to make new all-time highs at the US$120 level. Soon after, the tech stock started to turn south subsequent to a short-seller’s report surfacing in late September. 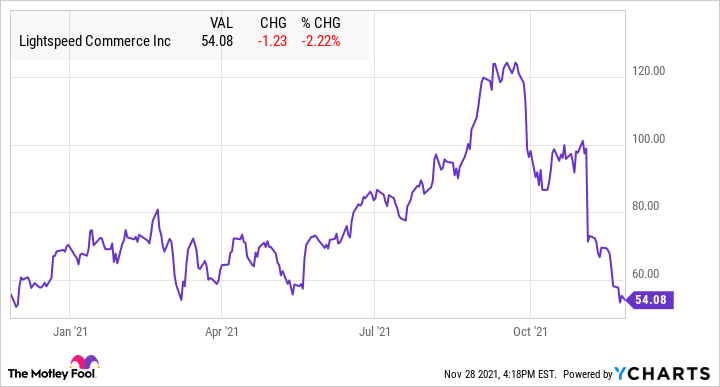 To be fair, the first graph shows that the market got overly excited about Lightspeed stock, pushing the stock way higher in comparison to Shopify stock. The extension led to a more painful correction triggered by the short-seller report.

It didn’t help that in early October, former hedge fund manager and current host of Mad Money on CNBC highlighted key points from the Spruce Point Capital’s short report on Lightspeed, including the following:

Cramer elaborated that the first point was about Lightspeed inflating its business, including the number of offices it had, to prepare for a successful initial public offering. If there’s substance in that, it shows dishonesty in the management at the time.

The second point is about Lightspeed changing its revenue recognition to make its numbers bigger than they actually were, including the crucial average revenue per user (ARPU) metric. If so, then investors can’t make a fair comparison of the financial metrics in one quarter or year over another period.

At the time, Cramer concluded that LSPD stock was simply too expensive.

When Cramer published the above Lightspeed video, the tech stock was trading at about US$87 per share, at which time, the LSPD stock valuation was approximately 25 times sales. At US$54 per share, LSPD stock is 38% cheaper than when Cramer thought the stock was pricey. The current valuations of 20.6 times last 12-month sales and 13.1 times next 12-month sales are much more appetizing than before.

One analyst may be biased. But according to the average 12-month price target across 11 analysts, LSPD stock trades at about half of what it’s worth and therefore could almost double from current levels! The market could continue to shy away from the stock in the near term. So, going into December, the tech stock could go lower. No one has a crystal ball to tell what near-term volatility could do to the poor stock.

Although management expects revenue growth to stay strong this fiscal year, Lightspeed’s losses are expected to widen. So, no matter what, the tech stock remains a speculative investment. Consequently, interested investors should size their positions accordingly.