Few stocks are unscathed in this current market correction. Okay, so it’s not yet considered a correction for the Canadian market, which has only dipped about 5% from the peak. However, certain areas of the stock market are experiencing a real market crash. While some pain will come from catching falling knives, if you filter and pick the best of the best, you could be substantially rewarded three to five years later. Here are two top TSX stocks you should keep a watchful eye on this month.

The king of TSX stocks to watch in December

Don’t take your eyes off Converge Technology Solutions (TSX:CTS). It has been the king of stocks in the last 12 months, beating even monsters like Tesla stock! It has also held up pretty well so far in the market selloff that has been especially brutal to growth stocks like Lightspeed. 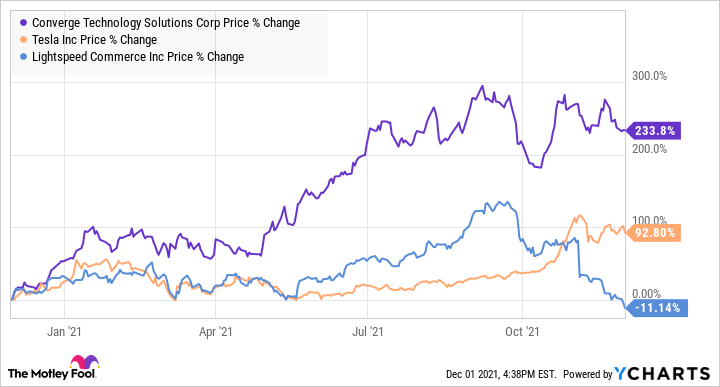 To be fair, Converge doesn’t trade at a stratospheric multiple like Lightspeed does. After a more than 50% correction, Lightspeed stock still trades at about 19.3 times the last 12-month sales and 12.2 times the next 12-month sales. In comparison, Converge’s multiples of 1.8 times and 1.2 times, respectively, are much more palatable.

Although Converge is a relatively low-margin business as a provider of tech solutions and services, it has been executing well on its M&A strategy with solid revenue and adjusted EBITDA growth to show. In the first nine months of the year, the tech stock boosted revenue by 55% to over $1 billion from $659 million a year ago. Similarly, in the same period, its adjusted EBITDA, a cash flow proxy, increased by 59% to north of $59 million. Its year-to-date gross profit is almost $230 million, leading to a gross profit margin of close to 22.5%.

The top TSX stock is down about 16% from its peak, but it has still appreciated more than 200% from a year ago! At $10.85 per share at writing, the tech stock has room to appreciate 27%, over the next 12 months, according to the consensus price target of 10 analysts.

goeasy is another TSX stock to buy in a market correction

Other than Converge, goeasy (TSX:GSY) is another growth stock that has outperformed Tesla in the last 12 months. Analysts remain bullish on the stock, as their 12-month average price target suggests 36% near-term upside potential.

That said, the stock of the top non-prime consumer lender has corrected more than 21% from its recent peak. The downward momentum could continue. So, investors could see cheaper prices for the high-growth stock in December. Watch the stock for laddered entry points to average into a long-term position. 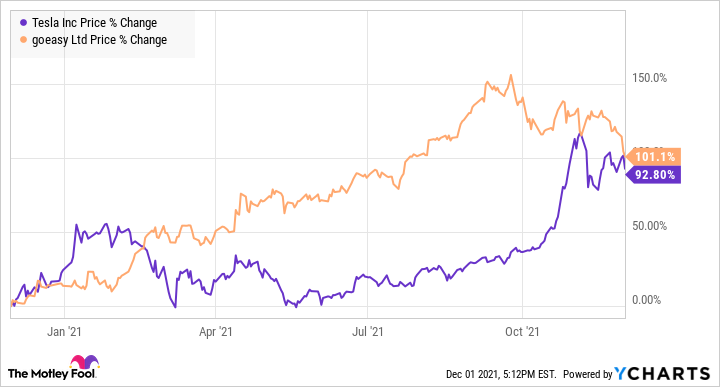 Though the growth stock has its ups and downs, the company is well run, which drove the stock to be an eight-bagger over the last five years and a 37-bagger in the last 10 years. Notably, goeasy is a Canadian Dividend Aristocrat that has increased its dividend at a compound annual growth rate of about 21% since 2005. 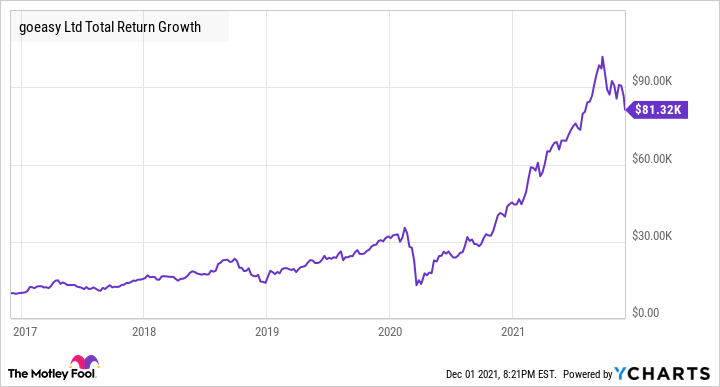 The market crash in growth stocks may not be over yet. Make sure you have a long-term investing mindset. Build your positions over the next months instead of buying in a lump sum.

2 Top REITs You Can Buy and Hold Forever

These two top REITs are among the best options for long-term, buy-and-hold investors in this current uncertain market.

Could Bombardier Stock Be a Big Winner in 2023?

Bombardier stock outperformed the TSX Composite Index last year by executing its turnaround. Could it continue the momentum in 2023?

Here are three cheap stocks that are well positioned to reward investors in the months ahead.

Looking for Yield? 2 Top Bond Proxies Could Be Just the Ticket

3 Blue-Chip Dividend Stocks I’d Buy Over and Over