Home » Investing » Bombardier is poised to rise: should short sellers exit this aircraft?

Last week, we published an article discussing major short interest positions on the TSE. One of the companies mentioned, Bombardier (TSX: BBD.B) has consistently ranked in the top 10 in TSE short interest (by number of shares) for the last five years.

Long-term shareholders of Bombardier have patiently waited for the company to catch up with other global manufacturers in the post-recession years, as revenue, earnings, and the company’s stock price all declined, while peer corporations slowly climbed out of the morass of 2008: 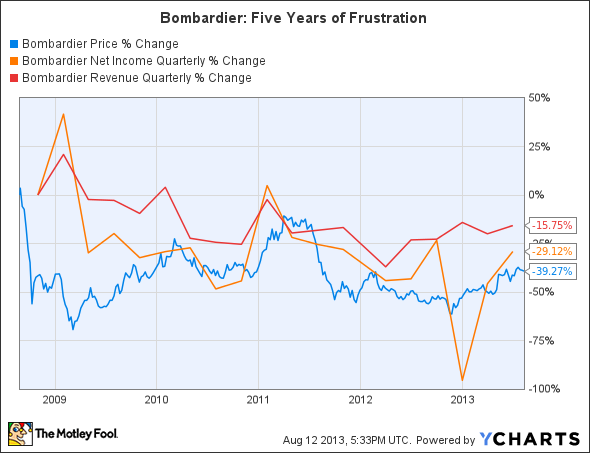 The chart above provides as good an explanation as any for the company’s five-year stint atop the TSE’s short interest charts. If we narrow the time frame to more recent history, from the beginning of the last fiscal year forward, we see that fortunes may be brightening at the world’s only locomotive and aircraft company:

I picked this date with good reason: November 15th, 2012, marked the peak of short interest in Bombardier, at 68.6 million shares.  While short interest has approached this level on a few occasions since, it has declined to 39.8 million shares as of the latest reporting period.

From the preceding chart, you can see that there is a bit of “short squeeze” activity present over the last ten months, as some shorts have capitulated and bought back borrowed shares on the open market, contributing to Bombardier’s rise.

Yet other forces are also at work. Bombardier seems to be gaining much needed traction this year. Sales in the first half of the year exceeded the first six months of 2012 by more than 15%, and net income grew more than 8%.[AS3]  Investors may also sense that Bombardier is undervalued relative to its peer group. Of the major airplane manufacturers, and Siemens, which is one of the world’s leading train manufacturers, Bombardier has some space to rise when placed in context with its peers:

Bombardier is also poised to increase revenues with its offering in the narrow-body jet segment currently dominated by Boeing’s 737 series, Airbus’ A320 series, and Embraer’s E-Jet family. The CSeries is Bombardier’s attempt to break into the lucrative 100-149 seat configuration. A prominent first model in this series, the CS300 has faced delays in its test flight, but is expected to fly in the next few weeks, with delivery of its first models occurring in 2014.

But the most salient reason to think twice before betting against Bombardier is the company’s ballooning backlog, which reached $65.5 billion backlog at June 30th, split quite evenly between aerospace at $33.4 billion, and transportation, at $32.1 billion. The CSeries is propelling the company’s aerospace backlog, while transportation is virtually unchanged from a year earlier.

Large backlogs help manufacturing companies smooth out the recognition of revenue, as a good portion of revenue is recognized as product is delivered. Thus, a weak quarter in new sales can be offset by a higher volume of plane and train delivery. This makes life difficult for shorts who may expect news events such as delays in Bombardier’s CSeries to adversely affect the stock price. With a record backlog, this is not necessarily the case.

Aside from institutional investors who may use short positions in a company like Bombardier to hedge long bets on manufacturing growth, this security may be tricky to bet against over the next year. If you’re negative on Bombardier, you have some legitimate fuel for a short position, based on the last few years of underperformance. If you’re putting your money on the line, however, you might want to make sure you can carry the position for a while — in the near term, the path of least resistance for BBD.B may very well point up, not down.

3 US Stocks Every Canadian Should Own

Bombardier competitor Boeing has performed well in 2013, despite some well publicized troubles with its new Dreamliner aircraft. Are there other U.S. companies you should consider in order to diversify your portfolio? The Motley Fool has put together a Special FREE Report, “3 U.S. Stocks Every Canadian Should Own.” Just click here now to receive your copy at no charge!

The Motley Fool’s purpose is to help the world invest, better. Click here now for your free subscription to Take Stock, The Motley Fool Canada’s free investing newsletter. Packed with stock ideas and investing advice, it is essential reading for anyone looking to build and grow their wealth in the years ahead.