There’s no way to sugar coat things, 2014 was an abysmal year for investors in Penn West Petroleum Ltd (TSX:PWT)(NYSE:PWE). The oil and gas company, which has been trying to turn itself around, was absolutely crushed last year as we see in the following chart. 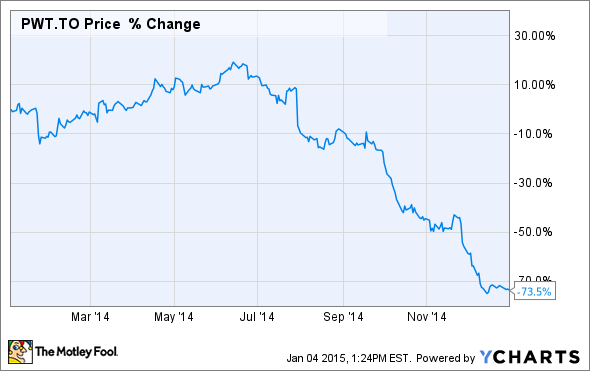 Here is how things spiraled out of control.

The calm before the storm

All things considered, Penn West got off to a solid start in 2014. The company reported a solid first quarter as production was strong, funds flow was up, and debt had been reduced. The company noted that the quarter was “a clear step forward toward achieving the goals in our long-term plan.”

The company’s second quarter results were pretty good too. Its production volumes were solid and it was making strides towards accomplishing the goals it set as part of its long-term turnaround plan. Unfortunately, that was the last bit of good news the company would have for its investors in 2014.

A mistake of epic proportions

Concurrent with reporting its second quarter operational results, the company also announced that its management had initiated an internal review of its accounting practices. Further, it decided to restate some of its historical financial statements at that time. Investors absolutely arbore accounting issues, which is why the stock started to sell off. However, that wasn’t the news that really crushed the stock last year.

Instead, while investors focused on the accounting issues, it likely caused them to miss the company’s update on its oil and gas hedges. Penn West Petroleum boasted that, “As of July 1, 2014, we are now participating fully in the currently strong crude oil price environment with the last of our WTI hedge positions expiring on June 30, 2014. This allows us to immediately realize 100% of current market pricing which currently exceeds our 2014 budget assumption by approximately $10 per barrel.”

In hindsight this was an awful decision as the company couldn’t have picked a worse time to leave itself unexposed to the downside of oil prices. As we see on this next chart the price of oil started falling shortly after the last of Penn West Petroleum’s oil hedges ran out. 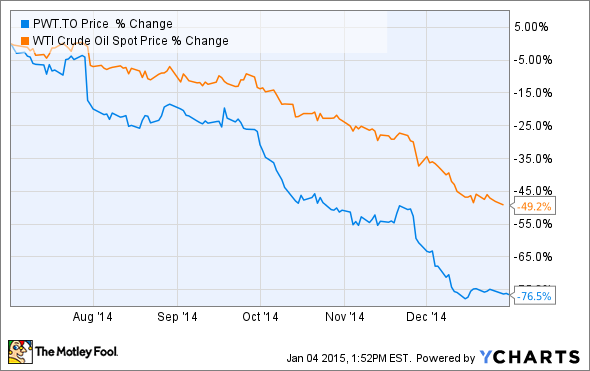 In the hopes of realizing a little more profit on each barrel of oil the company ended up putting itself in a perilous position when oil prices unexpectedly plunged as it was 100% exposed to the downside of oil prices. This turned out to be a big mistake that really upended any chance the company had of continuing its turnaround.

The mistake of leaving itself exposed to the downside of oil prices forced the company to make some rather dramatic changes. With its funds flow expected to drop along with oil prices, the company was forced to reduce its 2015 capital budget just one month after announcing the details of its original plan as oil prices fell further than the company ever thought was possible. The stunning drop in oil prices also left the company no choice but to slash its dividend 79% so that it could have the financial flexibility to weather the current storm in the oil market.

Penn West Petroleum’s management made one poor decision that really came back to bite the company. By allowing its oil hedges to run off in an effort to squeeze a little more profit per barrel of oil, the company left itself fully exposed to what is turning out to be the deepest oil route in years. It’s a move that was intended to accelerate its turnaround, but instead has set the company back so that it will be even harder to engineer a turnaround unless oil prices really spike in the coming years.