The earnings season within the earnings season. Canada’s banks begin to report earnings this week and as is usual, all eyes will be on the Big Five. First out of the gate is Canada’s largest bank, Royal Bank of Canada (TSX:RY)(NYSE:RY). The company is scheduled to report third-quarter earnings before they open on Wednesday, August 22.

The company got off to a great start in 2018, but has since begun to trade sideways. The end result? The company is down approximately 1% year to date. 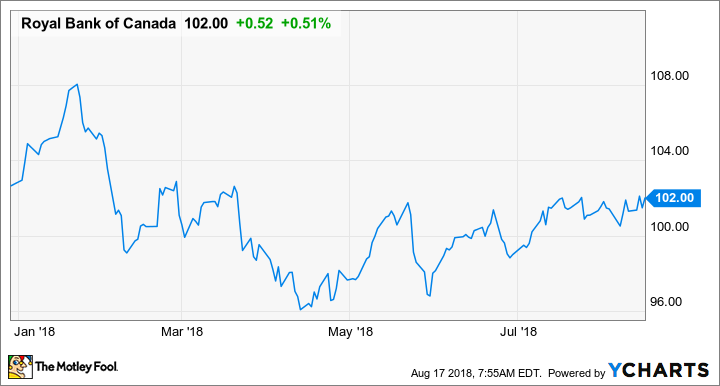 The company’s performance also places it at the middle of the pack, well below the mid-single digit returns of competitors Toronto-Dominion Bank and Bank of Montreal.

Let’s take a look at what to expect from earnings this week.

The company has a pretty good record, having beat earnings and revenue estimates in four straight quarters. Likewise, Royal Bank’s stock has jumped post-earnings in the weeks following in three of the past four quarters.

On average, analysts have been revising their estimates upwards. This indicates that they are leaning toward a positive earnings release, which can be a catalyst to propel the stock higher.

As such, investors can expect the company to announce its second dividend raise of the year next week.

Thanks to its mediocre performance, Royal Bank is now trading at a year-low price of 13.06 times earnings. The company’s forward price-to-earnings ratio of 12.16 is also the lowest it’s been in over a year. Looking further back, Royal Bank is trading slightly above its five-year historical P/E ratio of 12.5.

Royal Bank is currently trading near the middle of its 52-week range. Analysts have a one-year price target of $107.33, which implies upside of approximately 5.2%.

Overall, it appears that the company is fairly valued based on today’s price. The truth is, Royal Bank is rarely cheap and usually trades in line with historical averages.

Don’t try to time an investment in Royal Bank. Not including dividends, the company’s share price has a compound annual growth rate of 10% over the past five years. Take a quick look at the five-year charts of all the big banks, and you’ll see that they’ve been the most reliable investments on the Index.

If you are worried about a significant post-earnings move, the best approach would be to add half a position before earnings and half after. Otherwise, Royal Bank is a solid investment at any point.