The Motley Fool Canada » Dividend Stocks » Dollarama Inc. (TSX:DOL) Is in Need of a Catalyst

In fact, it was quite the opposite. The last three major Canadian companies to announce a stock split underperformed the market in the year following. How has Dollarama fared? Not that great.

Since Dollarama’s split, its share price has lost 8.23% of its value. In comparison, the S&P/TSX Composite Index has eeked out a 0.5% gain.

Has Dollarama’s recent struggles presented investors with a buying opportunity?

As of writing, Dollarama is trading at 31.3 times earnings. Although this is near its one-year low, it’s still not that cheap. Take a look at the chart below. 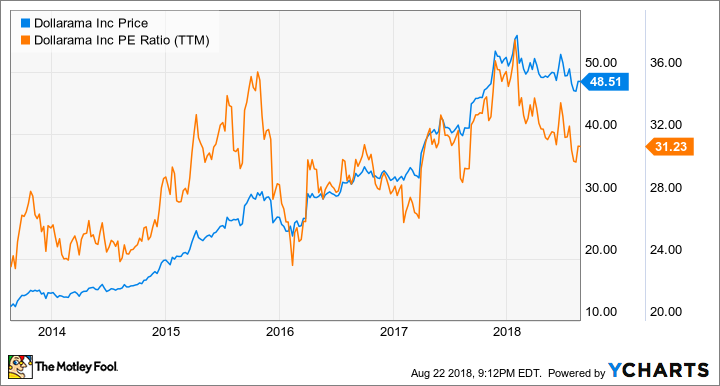 As you can see, Dollarama’s current P/E is above its five-year historical average of 28.9. Its price-to-sales and price-to-cash flow also are above the company’s five-year averages.

Here is the issue. Dollarama is experiencing slower growth and as such, should be trading below its historical averages.

Dollarama’s P/E to growth (PEG) ratio is a hefty 2.15. Typically, a company is considered to be a good bargain if its PEG ratio is below one. Thus, Dollarama’s share price has gotten ahead of its growth rate and can be considered overvalued.

There is a tinge of irony here. Dollarama offers general merchandise at good value. Unfortunately, it’s quite the opposite for investors. There is nothing of value about its current stock price.

The company is a Canadian Dividend Aristocrat having raised dividends for seven straight years. Yet, even the company’s 0.33% yield is nothing to get excited about.

My thesis on the company hasn’t changed. Dollarama is great company that has had an impressive run. At current prices and increasing competition, there isn’t much upside. The company is stuck in no man’s land. Its yield is not high enough to attract income investors, it’s not a value play and there are plenty of companies that offer better growth rates.

Investors expecting Dollarama to deliver exponential growth as it has in the past will surely be disappointed.

Fool contributor Mat Litalien has no position in any of the companies listed.

You won’t want to miss this…

...and lock in the lowest price we've EVER made available!

But hurry, this offer will expire at MIDNIGHT!