The TSX has been falling hard for more than a week now as even news of a new NAFTA deal has not been enough to generate positivity around many popular Canadian stocks, including Shopify Inc (TSX:SHOP)(NYSE:SHOP), which has come down once in price after reaching $215 a share.

This range activity is a pattern that we’ve seen from Shopify over the past several months: 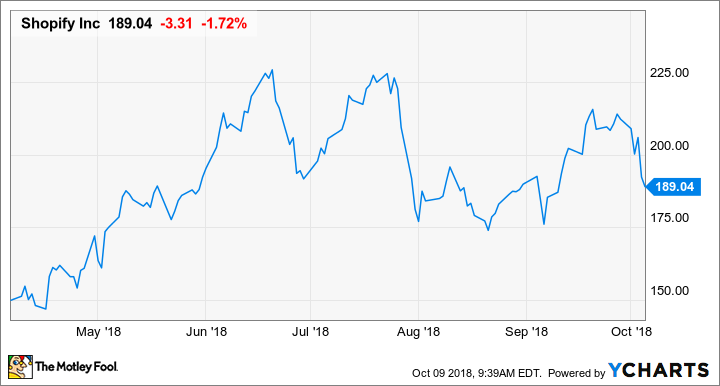 Previously, we’ve seen the stock run into resistance at around $225 a share, although its latest bounce back in price was not able to reach those highs anymore. If this trend continues, we could see Shopify drop to $175 again. If it does, it could be a good buying opportunity.

The reason I say that is because nothing adverse has occurred recently that should have caused a sell-off in the stock’s price. Instead, it’s the markets as a whole that are weighing down not just Shopify, but other otherwise solid stocks on the TSX as well.

When you see that type of collateral damage bring a stock down in price as opposed to something due to its own doing, then chances are good that the share price will be rebound, especially if there are no significant developments that should keep either the stock or the market down.

Despite the recent volatility that Shopify has seen in recent months, it is still up around 50% year to date. The stock has normally been one of the top-performing ones on the TSX, and with an earnings release coming up later this month, a strong quarter could be what sends the stock up and over $200 for good.

While the company’s recent Q2 performance did continue to show concerns, if Shopify is able to improve on its growth rate, that could be all that it needs to get investors excited about the stock again.

As we’ve seen when it comes to cannabis stocks, profitability is not as important as growth, and investors are willing to pay a big premium as long as there is a reasonable expectation of strong growth in future quarters and years.

With Shopify’s growth rate continuing to decline, it will need to do something to help turn that around. One thing that can help the company with that is pot sales. Shopify’s platform is going to see a lot of activity after October 17 when purchasing through online stores is how much of the country will be able to buy pot legally.

However, we will have to wait another quarter before seeing what impact pot has on Shopify’s overall growth, but if the hype measures up, then Shopify could be one stock that could benefit handsomely from this high-growth industry.

Despite its challenges, Shopify remains a stock with a lot of potential. Any company that can generate sales growth north of 50% on a continuous basis is one that could provide significant returns for investors.

While profitability is a challenge, it’s a lot easier for companies to cut costs than it is to be able to find ways to grow sales, and with the latter figured out, Shopify just needs to focus on the former.