As of writing, the Canadian market (using iShares S&P TSX 60 Index ETF as a proxy) has fallen nearly 10% from its 52-week high. While the market continued its downward action over the last week, the utilities sector has generally been up.

This indicates that funds have rotated from other sectors back into the relatively safe utilities stocks, which have come down in the last 12 months or so from the fears of increasing interest rates. 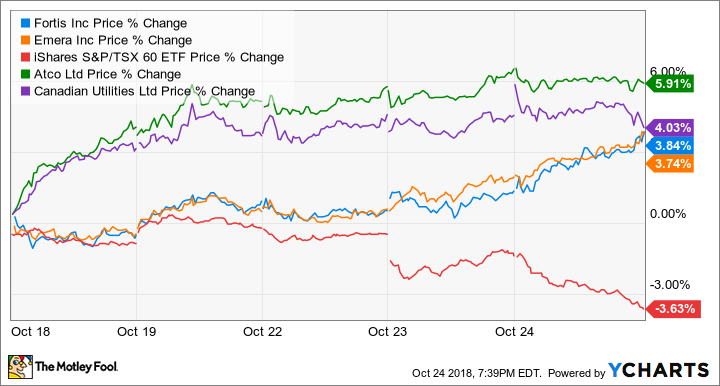 Utilities such as Fortis (TSX:FTS)(NYSE:FTS), Emera (TSX:EMA), ATCO (TSX:ACO.X), and Canadian Utilities (TSX:CU), are serving as a safe haven in a volatile market. Not only do they have above-average business stability, but they also offer safe and growing dividend income.

A big part of the business operations of Fortis, Emera, ATCO, and Canadian Utilities is regulated. This means that the returns on equity are largely predictable, and there will be less chance of surprises in their business performance.

About 97% of Fortis’ assets are regulated. Moreover, about 92% of its assets are electric poles, wires, and natural gas pipelines for transmission and distribution.

Fortis management had the foresight of starting to acquire U.S.utilities in 2013, at which time the Canadian dollar was strong against the U.S. dollar. After acquiring three U.S. utilities, including Central Hudson, UNS Energy, and ITC, from 2013 to 2016, Fortis became a top 15 North American utility. Its U.S. utilities have higher rate-base growth than its Canadian and Caribbean businesses. Fortis recently updated its five-year capital plan, which supports a dividend-per-share growth of about 6% on average through 2023. Management believes that it doesn’t need to push out more stock to fund the new capital plan, so existing shareholders have no worries of dilution.

All four utilities offer safe yields of 4-5.8% with sustainable payout ratios. They’re trading at relatively cheap valuations compared to their five-year valuations. So, if you’re looking for a safe haven, consider picking up some shares in a regulated utility for income and to increase the stability of your portfolio.

Fortis has the highest quality, but it also trades at less of a discount than the others. Emera offers the biggest yield of 5.8% but the lowest dividend growth. ATCO offers a smaller yield (of about 4%) than Canadian Utilities’ nearly 5.2% yield, but it’s likely to continue growing its dividend at a faster pace.