Pembina Pipeline (TSX:PPL)(NYSE:PBA) is the third-largest energy infrastructure stock on the TSX by market cap. It’s interesting that it has been holding up better in the last year compared to its bigger and smaller peers.

As of writing, Pembina stock has essentially stayed where it was from a year ago, while the stocks of larger peers, Enbridge and TransCanada, have fallen 6.5% and 9.6%, respectively. In the period, the stocks of smaller peers, Keyera and Inter Pipeline, have declined 21% and 18.9%, respectively. Pembina’s price appreciation over the three-, five-, and 10-year periods have also been higher than its peers. 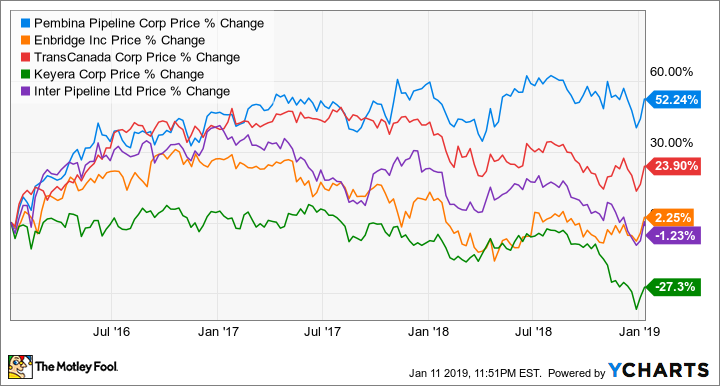 Since 2015, Pembina has improved the quality of its company. For example, it has reduced its payout ratio from about 72% to about 60%. Moreover, it has improved its cash flow generation against its debt levels from a funds-from-operations-to-debt ratio of about 16% to roughly 23%. This has helped the company maintain an investment-grade credit rating of BBB.

Pembina has provided energy transportation and midstream service in North America for more than six decades, with diverse and integrated operations across the gas and natural gas liquids, and the crude oil and condensate value chains.

About 85% of Pembina’s adjusted earnings before interest, taxes, depreciation, and amortization are contracted. So, its cash flow generation is largely predictable. Currently, Pembina pays out about 85% of its fee-based cash flow, a huge improvement from 2015’s payout ratio of about 135%.

At $43.74 per share as of writing, Pembina offers a safe yield of about 5.2%. The company has increased its dividend per share for seven consecutive years with a five-year growth rate of 6.4%. Its monthly dividend per share is about 5.5% higher than it was a year ago.

Pembina is a good stock for income and conservative stock portfolios. Since 2007, the stock has outperformed three of its four peers mentioned previously by delivering annualized total returns of 12.3%. With below-average volatility, Pembina is also a good stabilizer for your portfolio.

The stock seems to be undervalued. Thomson Reuters has a 12-month mean target of $54.60 per share on Pembina for near-term upside potential or total returns potential of almost 25% and 30%, respectively.