Then the Fukushima nuclear reactor disaster happened. Investing in nuclear reactors after such a tragedy no longer seemed possible. But time heals all wounds, especially in the stock market. 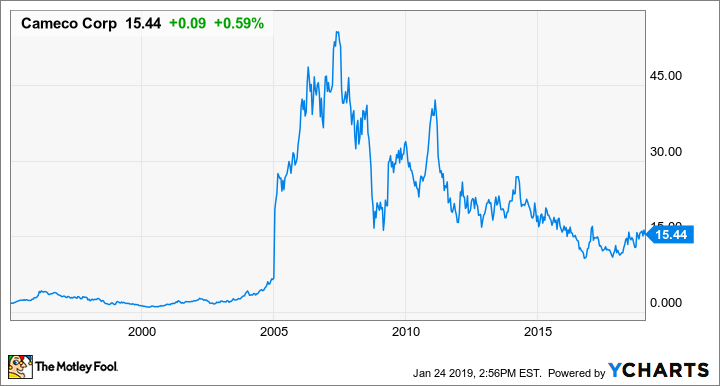 Fast forward to 2019, and things are looking up for Cameco, with three solid reasons why now is the time to invest in this uranium producer.

Let’s first take a look at the uranium market as a whole. While the mineral once traded at about US$60 per pound, after Fukushima those numbers dropped to US$20. But countries around the world are looking at nuclear power again, as it’s a cleaner way to produce energy. And there are some huge countries looking to take advantage of this.

China is set to quadruple its reactor fleet to make a cut to its reliance on coal. New reactors are being built in India, South Korea, Russia, and Japan, with a total of 55 reactors currently under construction around the world. The demand for uranium should rise 40% by 2025 when all these are reactors built.

The introduction of so many new reactors has created a rare growth opportunity within the uranium industry, with companies like Cameco ready to power up production yet again.

Cameco is one of the world’s largest uranium producers and remains that way, despite cutting back on production. After Fukushima, uranium had a supply glut. Cameco slashed its dividend and closed the doors of many of its mining facilities in response.

Cameco is now in the process of gearing up to go ahead with production again, but only once finances are completely under control. The company is in a position to start up quickly with its closed-down mines and expand even further once uranium prices shoot up again. Its McArthur River mine in Saskatchewan alone produces 50% of uranium output when it’s at normal production.

No matter where you look, analysts believe this stock is undervalued. There is just so much future potential with this stock, yet the market completely neglects it.

Shares currently trade at about $15.50, but a fair value is closer to $20 per share. I wouldn’t buy Cameco now hoping for a massive profit this year, however, but I would look further into the future. Investing in this company now means you could be in a prime position to see those historic prices of $40 or even $50 per share. That’s a potential increase of 222%, meaning if you put $10,000 down on this stock, you could triple that to around $33,000.

So, I’m not saying it won’t be tough watching this stock for the next while. The uranium market has been rough, and it’s only been about a year since stock prices have started to move up again. Never mind the current market downturn. That definitely makes Cameco a buy-and-hold stock. But once reactors have fired up around the world, expect shares to fire up alongside them.