CCL Industries (TSX:CCL.B) and Intertape Polymer Group (TSX:ITP) are in similar lines of business, but one has delivered much higher returns in the short run.

Last year, CCL Industries stock showed strength compared to Intertape, as the former fell less than 14%, while the latter declined more than 21%. From their December lows, Intertape stock has done so much better. It’s up 30% compared to CCL Industries’s 14%.

It goes to show that value stocks can outperform more quality stocks. The key is that the value stock in question must be fundamentally sound, and you must buy it at a big discount. At its December low, when Intertape traded at $15 per share, its price-to-earnings ratio (P/E) was roughly 10.4. Normally, it can trade at a P/E of 15. So, the stock was trading at a discount of about 30%, which was a big discount.

The fact that Intertape had manageable debt levels, was profitable, had free cash flow, and was trading at a 30% discount made it a fundamentally sound value stock and a strong candidate for a potentially profitable trade.

At its December low, when CCL Industries traded at $48 per share, its P/E was roughly 17.6. The stock’s long-term normal P/E is about 22. So, the stock was trading at a discount of about 20%, which was a pretty good value for a higher-quality stock.

CCL Industries also has a more solid balance sheet, higher margins, and stronger cash flow generation. In the last reported quarter, its debt-to-asset ratio was 63%. In the last four reported quarters, it generated $5 billion of revenue and net income of more than $500 million. So, its recent net margin was above 10%. It also generated nearly $730 million of operating cash flow. After subtracting capital spending, it had more than $400 million of free cash flow.

In the short run, fundamentally sound value stocks can outperform their higher-quality peers if you buy them at a big enough discount, as shown using Intertape and CCL Industries as an example. However, in times of distress, such as during a recession, CCL Industries stock should hold up much better. 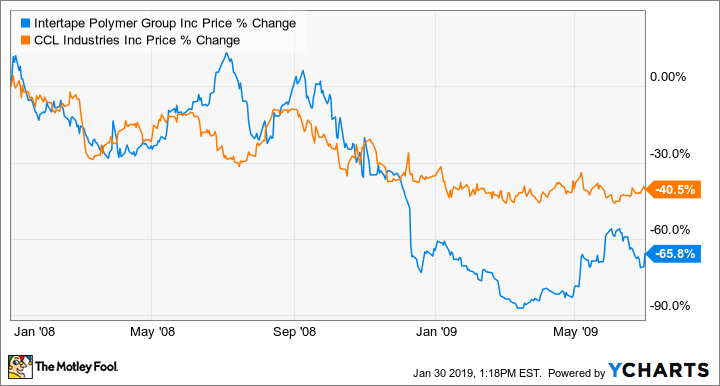 ITP data by YCharts. The price action of the stocks during the last recession.

Depending on an individual investor’s risk tolerance, time availability, and nature, they might trade in and out of a stock like Intertape with the aim of profitable trades or buy a stock like CCL Industries when it’s relatively cheap and simply hold on for a long time to benefit from the long-term growth of the business.