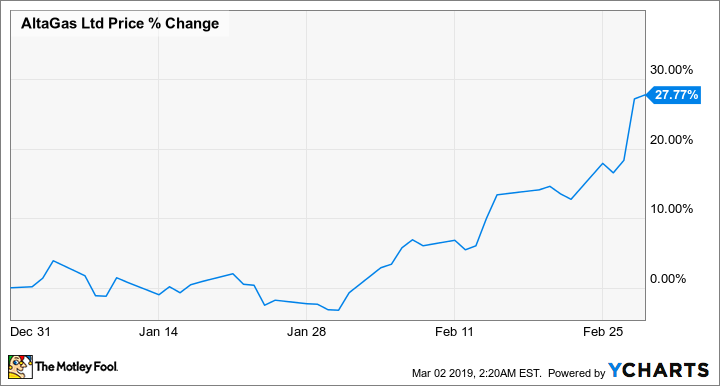 ALA data by YCharts. The year-to-date price action of AltaGas stock.

Is the stock finally turning around?

The utility has been transforming rapidly as it repositions itself after taking on too much debt to acquire WGL Holdings, which was largely a regulated gas utility in the United States.

This year, AltaGas expects $1 billion of growth projects to go into service, including the Ridley Island Propane Export Terminal, the extension of the Townsend Facility, Nig Creek Gas Plant, Mountain Valley Pipeline, and the Marquette Connector Pipeline. These will start contributing to cash flow as soon as they launch their operations.

As a result of these projects going into service soon, AltaGas estimates to generate normalized EBITDA of $1.2-1.3 billion and funds from operations of $850-950 million this year. AltaGas continues on its transformation. Since mid-2018, it has completed $3.8 billion in assets sales, including completing the sale of the remaining 55% stake in Northwest Hydro for net proceeds of about $1.37 billion recently.

This year, it plans to sell an additional $1.5-2 billion of assets. The proceeds will go to reducing its debt and investing in its midstream and U.S. utility segments. AltaGas plans to invest $1.3 billion in these operations.

AltaGas continues to transform, and it will look very different a year later. It’s focusing on midstream and U.S. utility assets, which largely generate either contracted or regulated cash flow.

The utility still carries a lot of debt on its balance sheet. At the end of 2018, it reported total long-term liabilities of $11.7 billion but has maintained an investment-grade S&P credit rating of “BBB-”.

Its 2019 normalized funds from operations per share were $2.95. So, its payout ratio was roughly 71%. With still a lot of change going on with the company, it’s not the safest idea for dividends.

That said, it can be an interesting turnaround investment. The stock’s turnaround story can progress if management can drive organic growth and make progress on reducing the company’s debt levels. A credit rating upgrade down the road will be nice.

Investors looking to spice up their portfolios can consider picking up some shares here and buy more shares if the stock dips and holds at the $16 level.

These stocks look cheap to buy for a TFSA focused on passive income.