Transcontinental (TSX:TCL.A) stock has declined more than 40% from its high. The stock has done very well over the last five years or so until it peaked in the June-to-August period and has been falling since. 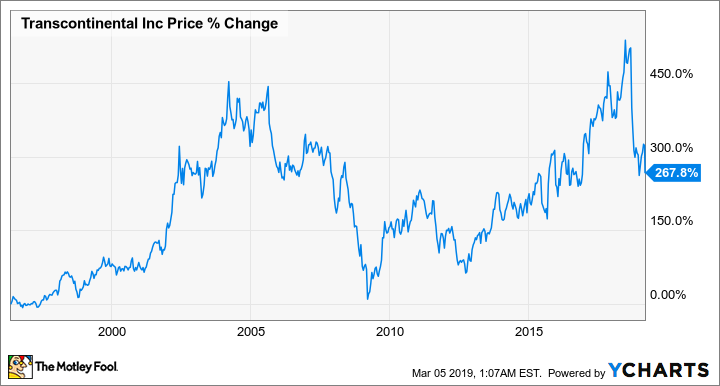 Let’s explore what’s going on with the company.

Transcontinental is Canada’s largest and one of North America’s largest printers. The company has been helping publishers and marketers deliver their content via integrated printing solutions for more than four decades.

It prints flyers, newspapers, magazines, catalogues, books, in-store marketing products, and more, from creative design to distribution. Some of its customers include The Gazette and The Toronto Star. In 2014, it began transitioning the company into packaging, which is a higher-growth area. It did so by selling some of its printing assets and buying Capri Pakaging. In 2018, Transcontinental made three acquisitions in flexible packaging, including Coveris Americas, Multifilm, and Flexipak.

Transcontinental closed the Coveris acquisition for about US$1.3 billion in fiscal Q3 2018. It was a key acquisition because Coveris has an international footprint in the United States, Canada, Ecuador, Guatemala, Mexico, the United Kingdom, New Zealand, and China.

Additionally, it expanded Transcontinental’s customer base by bringing in 3,500 customers. Furthermore, management expects cost-saving synergies of about US$20 million per year to materialize within 24 months of closing the acquisition.

Transcontinental reported fiscal Q1 results at the end of February. With the acquisitions it made, it wasn’t surprising that adjusted revenues rose 63% to $751.6 million compared to fiscal Q1 2018. However, adjusted operating income only increased by 9% to $76.7 million. Worse, adjusted earnings per share declined by 22% to $0.52.

At the end of fiscal Q1, Transcontinental had more than $1.1 billion of goodwill on its balance sheet, which was nearly a third of its total assets. In comparison, three quarters ago, before the company boosted its assets by 1.5 times via acquisitions, goodwill made up less than 23% of its assets.

If the intangible assets acquired through the acquisitions are deemed to be less than what they’re worth, there will be impairment charges down the road, and that would cause a decline in the stock.

At the end of fiscal Q1, the company also had more than $1.2 billion of long-term debt and more than $2 billion of total liabilities — the latter of which almost doubled from three quarters ago, largely because of the acquisitions.

Despite its huge transformation, Transcontinental has maintained an investment-grade S&P credit rating “BBB-”.

Transcontinental has increased its dividend per share every year since 2002. Its five-year dividend-growth rate is 7.4%. And management instilled confidence by hiking the dividend by nearly 4.8% at the end of February. In fiscal Q1, the company paid out about 38% of free cash flow as dividends. Its payout ratio was about 43% of earnings. So, there’s some margin of safety for the dividend.

Transcontinental is a “show me” story right now. It will take time for the company to integrate its acquisitions. If it experiences any hiccups or it later discovers that it has overpaid for its acquisitions, the stock will continue to underperform. Currently, it’s a stock for higher-risk investors.

That said, the company seems to be well managed with a long history of dividend hikes. Moreover, the dividend seems sustainable. If the company’s transformation succeeds, there could be mammoth upside to the value stock that trades at about 7.5 times forward earnings. In the meantime, the stock offers a decent yield of about 4.7%.