It may surprise you why the popular dividend stocks we’ll discuss here may not be as great as you think they are.

Chartwell Retirement Residences (TSX:CSH.UN) stock is regularly viewed as a safe way to participate in the mega-trend, seeing as it is the largest participant in the Canadian seniors housing sector.

However, depending on when shareholders bought the stock in 2016, they could have returns of anywhere from 1.8% to 9.2% per year. Why is there such a huge difference? In the past three years, Chartwell only increased its funds from operations by under 3.6% per unit, while the stock’s price-to-funds-from-operations ratio (P/FFO) has traded anywhere between 15.2 and 18.3. These are expensive multiples to pay for a mere 3.6% growth rate.

At the same time, the high P/FFO that it has maintained shows that the real estate investment trust has high-quality assets.

That’s why the stock has pretty much traded sideways between $13 and $16 over the last few years. So, investors are best to avoid Chartwell, unless they can grab it at under $14 per unit. Otherwise, they’ll be set for below-average returns.

For what seemed like the longest time (actually from 2009 to early 2018) Dollarama (TSX:DOL) stock did quite well, but the growth stock started breaking down in mid-2018.

There were several reasons for Dollarama’s underperformance since early 2018; company growth slowed compared to before and the stock traded at too high a multiple in early 2018 — as high as a price-to-earnings ratio (P/E) of 36.9!

To add to the weight on the stock, Dollarama has actually been destroying its book value since 2016. The increasing debt levels just weighed it down some more. Here’s a chart that illustrates this. 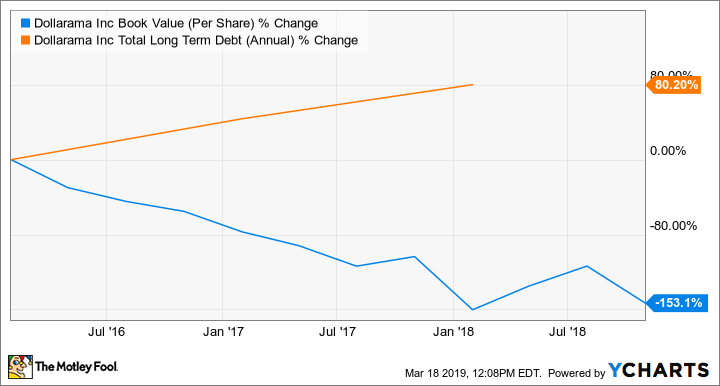 At under $35 per share as of writing, Dollarama is trading at a much more reasonable P/E of about 20.3, while it’s estimated to increase its earnings per share by about 12% per year over the next three to five years. However, the company is still highly leveraged with a debt-to-cap ratio of about 89%.

At the end of the last reported quarter, Dollarama had about $1.48 billion of long-term debt and nearly $2.36 billion of total liabilities. In comparison, over the trailing 12 months, the company generated nearly $557 million of operating cash flow. It had nearly $373 million of free cash flow after accounting for capital spending and dividend payments.

The quality of the underlying businesses of stocks you buy is important. Buying them at the right valuations is equally important for greater-than-average returns.

Between the two stocks, Dollarama will likely be a higher-return investment over the next five years. Currently, Thomson Reuters has a 12-month mean target of $41.20 per share on Dollarama the stock, which represents about 19% near-term upside potential. However, because of Dollarama’s debt levels, investors should be cognizant about their portfolio allocation to the stock.