Since Shopify’s (TSX:SHOP)(NYSE:SHOP) lowest point on Dec. 24, 2018, the stock has been doing nothing but grow, hitting all-time highs almost daily and passing the $300 mark last week, only to keep soaring past $350. The stock currently trades at $355 at the time of writing.

But while it might be on an upward ride in regards to stock, investors can’t say the same about its profitability. While revenue continues to grow, it’s mainly the hype surrounding this stock that’s kept it going. Its latest earnings report saw revenue of $320.5 million; that’s growth of 50% year over year.

That doesn’t mean growth and profit aren’t in its long-term outlook. There are a number of spaces Shopify still can tackle and is in the process of doing so. That includes its merchants solutions arm, which has already seen a large amount of growth and has been giving the company some solid numbers; in this last quarter alone, this segment had an increase of 58% year over year to $180 million.

It’s those numbers that had analysts and investors alike incredibly excited last week and are likely the reason for the explosion in shares. Headlines read 50% rise in revenue all over the place, which blew past both analyst and the company’s own expectations — something all investors like to hear.

Beyond that, the company also increased its prediction on revenue growth to $1.5 billion for the fiscal year of 2019. This increase was yet another super surprise for investors. That cash will likely go towards further research and development for the company, so it can continue to push out innovative products and features. 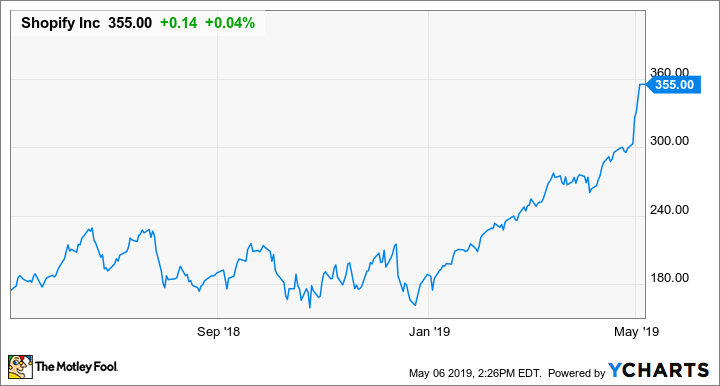 But there is something to look at. When a stock rises from about $290 to $355 in the space of a week, it makes me nervous. It takes me back to the early days of the cannabis sector, where investors were afraid that if they didn’t buy immediately, they’d miss the boat.

At $355 a share, this is not like the cheap marijuana stocks of yesteryear. But insane growth can also see insane falls. Shopify currently trades at 24 times sales and 455 times next years expected earnings, which is basically unheard of outside the marijuana sector.

Then there’s the company’s history, and I don’t mean years and years ago but only months and months. This stock traded at less than about half where it is now only six months ago. With a recession in our potential future, that means this stock could see another huge drop like it saw last summer and could soon reach numbers as low as $200 per share in the next 12 months, according to some analysts.

That drop could come even soon with these high numbers, as a sell off is almost certainly going to happen. Investors can only be patient for so long with such increases.

That all being said, this is a killer stock with a very bright future. If you’d bought the stock under $200 a share, I’d just hold on to it as it likely won’t drop further than that number. But if you’re looking to buy a bunch of shares of this stock, I’d wait a couple of months. A drop is a very real possibility, but when it happens, I’d load up on Shopify.