Canadian banks have been getting a bad rap lately, and it’s easy to see why. Analysts, the Federal Reserve … everyone is pretty much saying that recession is in our midst, and in Canada that recession could stem from a mortgage and/or housing crisis.

No wonder that Canadian bank stocks have gone down — the top loaners in the country and the ones to get hit first and hardest. But not only are some analysts believing that the dip in share price is premature; they also think it might not be warranted.

Canadian banks fared as some of the best in the world during the last recession back in 2008. If we’re taking a look at the top three Canadian banks, you’ll see that while there is a dip, each rebounds in an incredibly quick period of time. After that, the stocks set off soaring. 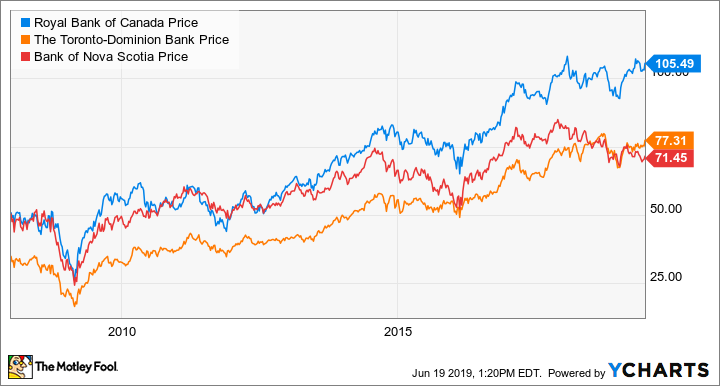 But a lot can happen in a decade. Let’s take a look at these three banks and see if they still have what it takes to get investors through a recession relatively unscathed.

Toronto-Dominion Bank (TSX:TD)(NYSE:TD) has been like a diamond in the rough during the past year. While other banking stocks have been posting poor results, TD came out on top with some very positive numbers. Yet the bank has struggled to convince investors that they can trust this bank.

And again, that’s because it’s hard to trust any bank at this point. TD has been at the whim of the markets, despite having a very promising future ahead. As Fool writer Joey Frenette noted recently, “Canada’s most premier bank, Canada’s second-largest bank” is now also “Canada’s most American bank.” TD has become one of the top 10 banks in America, and it’s only getting started. This is an incredible bonus for shareholders who can now take advantage of both the Canadian and American economies by investing with TD. And with wealth management in the U.S. next on the growth list, this should provide further share growth for years to come.

Tied at the top for largest bank is Royal Bank of Canada (TSX:RY)(NYSE:RY). This stock has also been plagued by a poor outlook on the banking industry, with shares peaking at around $107 before slipping down to around $105 per share at the time of writing.

But Royal Bank should have investors confident in its future for relatively the same reasons they should trust TD: American expansion. Over the last few years, Royal Bank has expanded into the American economy mainly through its wealth and commercial management sector. That has created a massive amount of income for the company, helping to stave off market volatility. The company is also in the Caribbean, offering investors even more diversity by buying up its shares.

Bank of Nova Scotia (TSX:BNS)(NYSE:BNS), also known as Scotiabank, is listed as Canada’s third-largest by assets, and is also known as the most international among Canadian banks. The bank gets half of its revenue from Canada, a little from the U.S., and the rest through international operations that mainly lie in Latin America.

The reason investors get excited about this stock is due to this international expansion, which it’s continuing to do through acquisitions. It offers investors the potential for high growth and returns compared to those focusing in on the U.S. and Canada. Of course, it doesn’t come without its risks, but as a top bank, and given historical performance, this stock should continue growing for decades.

The main point I’m trying to drill down to here is that each one of these banks has the diversity shareholders should look for when choosing a stock. Before a recession, you want a stock that will have other avenues to fall back on should things in Canada go south (pardon the pun). Each of these stocks has that in spades and has proven in the past that they can rebound quickly in a time of crisis. Hopefully, they won’t have to prove anything like they did a decade ago.

Fool contributor Amy Legate-Wolfe has no position in any of the stocks mentioned. Bank of Nova Scotia is a recommendation of Stock Advisor Canada.