Large-cap stocks tend to steal the limelight. So, investors often overlook great wealth-creation investment ideas in small-cap stocks. Here are two interesting small-cap ideas that can deliver some impressive gains if they play their cards right.

Tricon Capital Group (TSX:TCN) is a principal investor and asset manager. This means it has skin in the game in the North American residential real estate portfolio that it manages. It has $7.2 billion of assets under management, including 75% that are principal investments and 25% that are third-party investments.

Although TCN stock was only listed on the Toronto Stock Exchange in 2010, it has actually been in operation since 1988. Since entering the single-family residential sector in 2012, it had compounded its book value per share at 24% per year thanks partly to a stronger U.S. dollar against the Canadian dollar.

The graph below shows that the company’s book value per share has grown steadily over time. 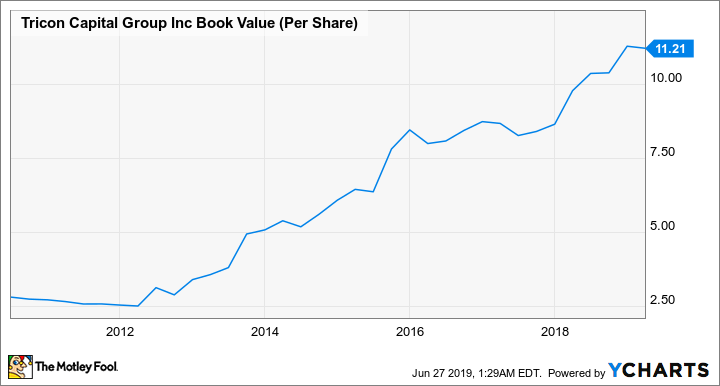 Currently, the market is offering a fabulous entry point for the solid real estate stock at a relatively low price to book of about 1.2.

At $9.89 per share, TCN stock can deliver incredible upside of about 36% over the near term according to the 12-month mean target of Thomson Reuters based on a more conservative foreign exchange of US$1 to CAD$1.30. The real estate stock also offers a yield of 2.8% to boost returns.

Due primarily to a number of acquisitions, it has compounded revenues at 33% per year over the last three years. Last year, the company increased revenues by 63% to over $212 million. Notably, 4.4% of the revenue growth was organic, which is always good to see.

Stingray shares have tumbled about 32% in the past year. What may have scared investors away is that the company’s debt has ballooned by 10 times since 2016, while in comparison operating cash flow has only increased by 1.8 times. As a result, the cash-flow-to-debt ratio has worsened from 0.54 to 0.1.

So, Stingray stock is a high-risk investment with potentially high rewards. At $5.99 per share, the stock can deliver incredible upside of about 53% according to Bay Street’s price target of $9.21.

The stock also offers a yield of 4.3% to boost returns. In the fiscal year that just ended at the end of March, Stingray generated $38 million of adjusted free cash flow and paid out $16 million of dividends to shareholders.

Investors will probably bid up the stock should the company show a strong ability to reduce its debt levels over the next few years.

Tricon and Stingray offer tremendous value today. However, it should be obvious that Tricon is a lower-risk investment for many reasons, such as operating in a stable industry that generates recurring cash flow.