I’ll be the first to admit that headlines like the one I’ve used can be a bit misleading at first. There are a bunch of stocks out there that are even twice as high in gains made since initial public offering (IPO), but over a long period, those gains seem less impressive.

That could be seen as the case with OpenText Corp. (TSX:OTEX)(NASDAQ:OTEX). The stock’s IPO was way back in 1996, giving investors plenty of time to see incredible gains. But here’s where things are different, and in this case, it’s best if I show you just how different. 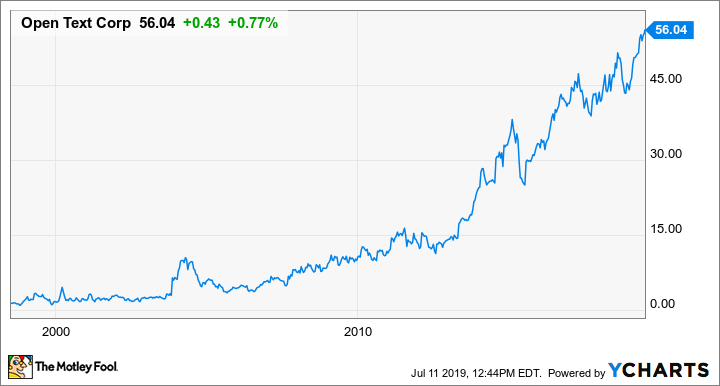 As you can see from the chart above, Open Text was fairly steady, with a slight bump around 2004. Even with the internet bubble appearing on the scene, this stock remained fairly low at the turn of the millennium. With its IPO trading at around $2.75, by 2010 the stock had only made it to around $10.50 — an increase of about 280%. It’s something, but nothing crazy.

Then after 2010, things took off, with the cloud-based company taking on a new strategy of mergers and acquisitions. In 2014, the stock soared as the company acquired companies and pumped out new products. Since then, the acquisition strategy hasn’t slowed down as the company continues to expand its rapidly growing cloud business.

In fact, 2014 also became the turning point for incredible free cash flow. As the company continued to acquire businesses, free cash flow levels increased 61% from 2014 to 2018 to $605 million. This has given investors a fantastic return on equity (ROE), typically ranging from 11-15% since 2010.

While you might think that OpenText could start slowing down, its returns haven’t seen this. Even during the last recession, adjusted earnings per share continued to climb, with annual total returns averaging 19% since 2007, which has also meant that the company has more than enough cash to cover its 1.7% dividend, something you don’t often see with tech stocks.

All that cash flow leaves the company with plenty of opportunities to continue its acquisitions strategy, and of course, its partnerships. Such a partnership recently gave the stock a boost, when OpenText announced that it would be expanding its partnership with Alphabet Inc.‘s cloud division, integrating its own products into the G Suite brand applications.

Another partnership was then announced shortly after with Mastercard, helping its companies “Increase financial efficiencies across global supply chains, starting in the automotive industry.” Basically, it’ll help people pay for and get paid quicker, easier, and safer, according to OpenText and Mastercard.

After a decade of mergers and acquisitions, it looks like partnerships might be part of the new strategy for OpenText, which leaves the business open to endless opportunities. Not that acquisitions would stop, but these large partnerships will give the stock boost after boost for years to come.

The bottom line here is that OpenText is a titan of its chosen industry, creating an invaluable operation for the data-driven age. Yet it has remained under the radar despite its stellar earnings and steady growth. As the company continues to partner with huge brand names such as Mastercard and Alphabet, the opportunity to buy the stock before it soars could be closing.

The stock currently trades at writing at $56.03, with analysts predicting the stock could rise to $64 in the next 12 months, giving it a potential upside of 16%.

Fool contributor Amy Legate-Wolfe has no position in any of the stocks mentioned. OpenText is a recommendation of Stock Advisor Canada.