The stock continued its soar to the top, hitting its all-time recently just shy of $460 per share. The stock had almost hit $450 over the last few weeks, and that’s when things started going a bit… off.

The stock has started to -up and down, most recently with the stock dropping 6% in a day, with no real reason as to why beyond its incredible share price. It looks like investors may have started to heed the warning of analysts: Shopify is absolutely, definitely, incredibly overvalued. 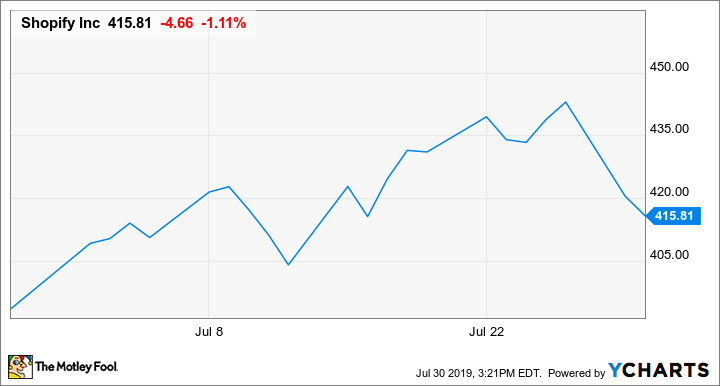 As analysts have warned, while Shopify is a growth heavyweight, with revenue increasing 50% year over year, and a stock price growing faster than the business itself. Ahead of earnings, investors worried about their big money made some big withdraws.

But while the company didn’t hit revenue growth of 50% again, it did see this area continue to grow. The company has continued to bank on brand loyalty, with Shopify’s own research suggesting that over 50% of buyers bought something at least two or more times from the same store last year.

It’s those repeat buyers Shopify is after, creating a base for those merchants to sell their products.

Yet the stock might have reached a fever pitch that it can’t come back from –not without some more serious announcements. With analysts giving the stock a target closer to $230 per share, that could be a disastrous plunge of 50% for shareholders.

If that happens, that would be the time I would buy up this stock. But no sooner.

Given its latest forecasts, Shopify is optimistic. The company raised its full-year guidance to $1.5 billion from $1.48 billion, and its second-quarter revenue range from $345 to $350 million, representing 42% growth year over year. Some analysts believed that could be even higher.

Then came the company’s results that yet again exceeded analyst expectations. Revenue increased by 48% compared to the same quarter last year, with operating loss coming in at 11% of revenue.

Net income came in at $15.8 million, well above analyst expectations of $3.4 million for the quarter. Overall, it looks like the company is well on its way to hitting that $1.5 billion mark.

Clearly, these share prices and earnings results aren’t over yet. Growth is still in the cards for Shopify, which is why I would be watching this stock very closely in the months to come.

The company continuously announces new products, additional tools for merchants, acquisitions, even new languages for investors to drool over. When it comes to international expansion, Shopify is in the initial stages.

Then of course there’s Shopify’s Fulfillment Network that should help merchants accelerate the delivery of their products –and that’s just in the United States.

Once the company continues to expand, it could turn into a worldwide phenomenon — one not witnessed in decades.